The last five years there was a lot to do about immigrants but also in West Europe several people started showing more hate against Jews and Muslims. The right wing movements have been growing stronger the last decade and many are not afraid tocome on the streets to tell their disgust about Jews and Muslims.

After the Holocaust, in which some six million Jews were exterminated in Nazi occupied Europe between 1942 and 1945 under the National Socialist regime of Adolf Hitler one would think no such hate against Jews would arise. But the formation of the state of Israel in 1948 soon  created new antisemitic tensions in the Middle East. In West Europe it was considered at the beginning of the 21st century to exist only on the margins of society. Our present day situation, having to notice more acts against the Jewish people has us to see that anti-semitism is growing again as if the 1930ies did not happen. The prejudice against, the hatred of, or the discrimination against Jews as an ethnic, religious, or racial group, and is widely recognized as a form of racism is back again.

Today we should have the words of Moses in our mind

Deuteronomy 28:37 OJB And thou shalt become an object of horror, a mashal, and a byword, among kol haGoyim whither Hashem shall lead thee.

The name of Jew has long been a proverbial mark of detestation and contempt among all the nations whither they have been dispersed, and is so to this day, whether among Christians, Mohmammedans, or Pagans.

Zechariah 8:13 OJB And it shall come to pass, that as ye were a kelalah (curse) among the Goyim, O Bais Yehudah, and Bais Yisroel; so will I save you, and ye shall be a berakhah; fear not, but let your hands be strong.

Lots of people who call themselves Christian do forget that their lord Jesus Christ was a Jew. They also should see or should have to know that all nations who now worship the true God, and receive the Sacred Scriptures as His word, have derived the whole of their divine knowledge, under God, from Jewish prophets, apostles, and teachers. That the Saviour in whom all nations shall be blessed, sprang from that favoured race, emphatically explains what is meant that they shall be a blessing. The full accomplishment of this prediction in Zecharia, however, is probably reserved for the future restoration of the Jews, which for sure shall come.

On account of what we can see now we would not have much to believe that the Jews are such a blessed people. As in the old times Israel was entering a very dangerous environment in Canaan and needed strong warnings against yielding to the temptations she would encounter, we should see the many warnings in Scripture also for today. We do know we can’t avoid the suffering people try to bring over us. It is known from Scriptures that Israel would suffer physical distresses, and that her enemies would plunder and oppress her. As freedom from Egypt came to epitomize God’s grace in the past, so return to Egyptian conditions represented His judgment and now in the time that many Jews come to live in the Promised Land, others may come to hate their divine position.

The people in ancient times were commanded, when they should come into possession of the Promised Land, to erect two pillars (probably suggesting the permanency and authority of the Law) and an altar, for sacrifice and propitiation in case of failure to keep God’s law (Deuteronomy 27:1-8).  When looking at the present Jewish state we notice that there are several non-religious Jews who go in against the Laws of God. They know and consider Israel as their Promised Land, but they forget the conditions for them being allowed to be resident in it.

The elohim has it about “foreigners” or “strangers” living on this globe, we having to know as lovers of God we would be “aliens” for those of this world. So it can be idle hope to think goyim would come to be willing to accept us and to have our faith in One true God respected.

The growing xenophobia we can see for us can also be sign which we may not ignore as a sign of coming end-times. Because we can see the augmentation of earthquakes and tsunamis as well as the increase of people setting others against others, religions against religions.

The rising fixation with Jewish power in our time has unwittingly revealed Jewish emasculation instead. Jews do not control the discourse; rather, the discourse controls them.

is said by the Community Security Trust (CST) which works across the Jewish community, from the most religious to the most secular, young to old, across the political spectrum and throughout the whole of the UK.

In their aim to bring more hate against the Jewish people we find people who are not afraid to bring false news, like telling that that Boris Yeltsin and Mikhail Gorbachev were both assumed names and that the men had been born Baruch Yeltzer and Mikhail Solomonovich Gorbachev (his real patronymic is Sergeyevich). In other words, the architects of Russian misery after the collapse of the Soviet Union were secret Jews, according some.

This was outlandish even by the standards of eastern European antisemitism. It was also hypermarginal in the media. You had to buy pamphlets on the street to read about plots to dilute the purity of the Russian race by a cabal of Jews/Zionists (the two words were interchangeable). Then came the internet. These days you are never more than a couple of clicks away from weapons-grade antisemitism.

writes the political columnist Rafael Behr in the Guardian.

But it still comes as a shock when one of the oldest and most versatile themes of the genre – the Jewish financier, dandling politicians on puppet strings, coordinating events in the shadows – finds its way on to the front page of a national British newspaper.

And that way not only the English newspaper The Daily Telegraph create a possible subtext which certain people misuse to contaminate the Jewish name.

Following the article’s publication on Thursday February the 8th, Theresa May’s former chief of staff, Nick Timothy was accused of anti-Semitism in the front-page exclusive he co-authored, and which RT UK along with many other national outlets picked up. 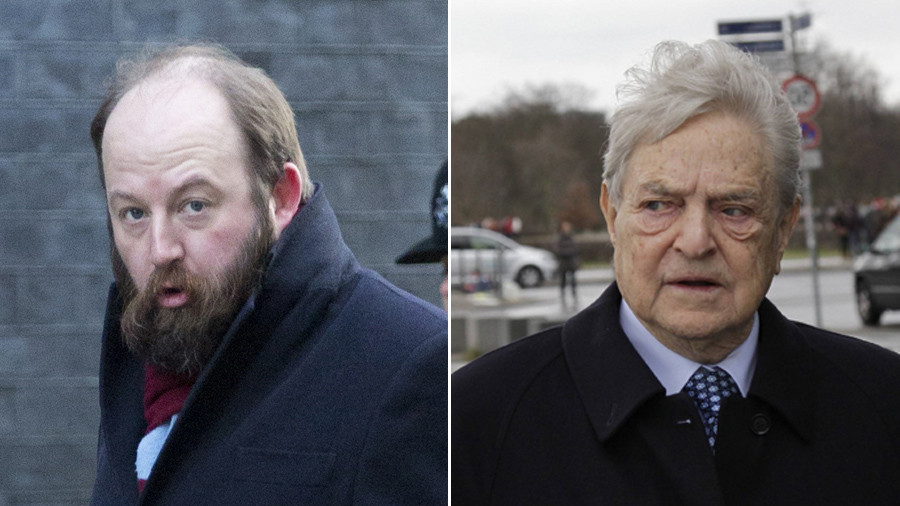 The article outlines how Soros, described by the Telegraph as the “man who broke the Bank of England” in reference to the fortune he made betting against the sterling in the 1990s, is attempting to undermine the Tory government by donating £400,000 (US$560,000) to pro-EU group Best for Britain. The group is campaigning for a second referendum on the final Brexit deal agreed between Parliament and the EU.

The accusations of anti-Semitism were made by Guardian columnist Owen Jones, academic Bonnie Greer and King’s College professor Jonathan Portes, among others. Portes drew a response from Timothy when he asked if he and the right-wing paper were really endorsing “anti-Semitic conspiracy theories.”

Telegraph story is disturbing because of the use of the idea it’s a “secret plot.” Soros is incredibly open about what he does. Say it’s wrong; fine. But idea it’s a secret plot is exactly the line being used in Hungary and elsewhere precisely because he is Jewish.

This needs saying clearly: baiting people on George Soros conspriacy theories is a tactic currently being used by would-be autocrats and anti-Semitic groups across the world.
Theresa May and Conservative MPs should distance themselves from this tactic, and fast. https://twitter.com/markdistef/sta

This was just one incident in Great-Britain, where the Jewish community was targeted at a rate of nearly four times a day last year, according to statistics from the Community Security Trust (CST), a charity that monitors antisemitism, which recorded 1,382 antisemitic incidents nationwide in 2017.
+++