We know already of Hadassah Tirosh who has amassed over 2 million followers on TikTok, where she proudly and openly shares about her Jewishness. She is not only Jewish, but also a Mexican Israeli trans content creator. whose early content, which begins in December of 2019 was posted under her previous name, David, who she remembers fondly and has taken the time to thank for helping her become the person she is today — she’s seen proudly wearing different colourful kippahs, her Star of David necklace and being generally proud and open about her Jewishness.

In 2021 Tik Tok is the seventh most used in the world, with the majority of its users being millennial and Gen Z. But it might be a very high surprise to find a 97-year old lady being a “hipster”.
Lily Ebert isn’t your typical 97-year-old. In June, after only joining the platform earlier this year, Ebert reached 1 million followers on Tik Tok and has now amassed over 1.2 million in total.
How?
Ebert is a Holocaust survivor and, together with her great-grandson Dov Forman who runs her account, is teaching the internet about her remarkable life and experiences as a survivor of Auschwitz and how she made a life for herself after liberation.

Lily Ebert from the camps

Originally from Hungary, Lily Ebert, the eldest of six children in a happy and loving family. When the Nazis invaded Hungary in March 1944, her family got to face the worst nightmare one can wish for.

Shortly after Germany invaded Hungary, Lily, her mother and her siblings were sent to the ghetto, and soon after were put on a train, crammed into dark and almost airless cattle wagons, to Auschwitz-Birkenau.

Lily at the age of about 4 or 5 had received from her mother a small gold pendant. Even then it wasn’t very expensive or unique but young Lily was very pleased with her present and now in the camp she did not want it to be taken by the Nazis. The small pendant had gone hiding, safe inside the heel of her mother’s shoe. Lily and her mother wore the same size of shoe and as they arrived at the camp her mother asked Lily to swap shoes with her.

Although this happened over 70 years ago Lily can still remember her arrival at the camp. After the long and terrible journey, ‘everyone was half-dead’. They were ordered to climb out of the train and stand together five in a row. There was a man with a stick in his hand. It was Dr Mengele, the notorious Nazi doctor who became known as the Angel of Death for his brutal experiments on inmates, though at the time Lily didn’t know who he was. With one movement of his hand Dr Mengele sealed the fate of the people before him. He sent people right or left — to life or to death. When they had arrived, Lily and her two sisters Renee and Piri were sent in one direction, while her mother Nina, brother Bela and sister Berta were sent to the left, the way to the gas chambers and crematorium. Lily never saw them again.

Lily had put on her mother’s shoes and was ordered to take a shower, whereafter her hair was cut, and their remaining belongings were stolen. It was her only remaining possession and a reminder of her happy childhood. It was a link to her murdered mother and a symbol of defiance. The Nazis would not be allowed to steal it! The Nazis left them with only their shoes, not having any idea of what was hidden in the heel of Lily’s shoe, the tiny pendant Lily’s last link with her mother. When the shoes wore out, she placed the pendant in her daily ration of bread. After about four months in Auschwitz, the sisters were transferred to an ammunition factory near Leipzig. The pendant went with them.

March to liberation after a human and a viral war

When the Front started closing in on the area, they were forced to leave Leipzig and sent on a two-day march. After seeing and suffering unimaginable horrors, on the second day of the march, April 13, 1945, they were finally liberated by Allied forces.

Lily tried to rebuild her life. She wore the pendant every day in memory of her murdered family. Eventually, she married and had children. In 1953 she was reunited with Imre, one of her brothers, who had been imprisoned in a Nazi labour camp. In 1967 she came to London with her husband and three children.

Having become a proud grandmother she came to face another life-threatening struggle: COVID-19. In January, she struggled with a brutal bout of the virus, but true to her nature, she fought through. For her it was her second chance to be alive.  It was then that her great-grandson Dov Forman decided to share a photo of his great-grandmother to Twitter celebrating her miraculous recovery.

My 97-Year-old Great Grandma, Lily Ebert BEM – Auschwitz Survivor, has just recovered from Covid- 19. Today she went on her first walk in a month after making a miraculous recovery. A fighter and survivor 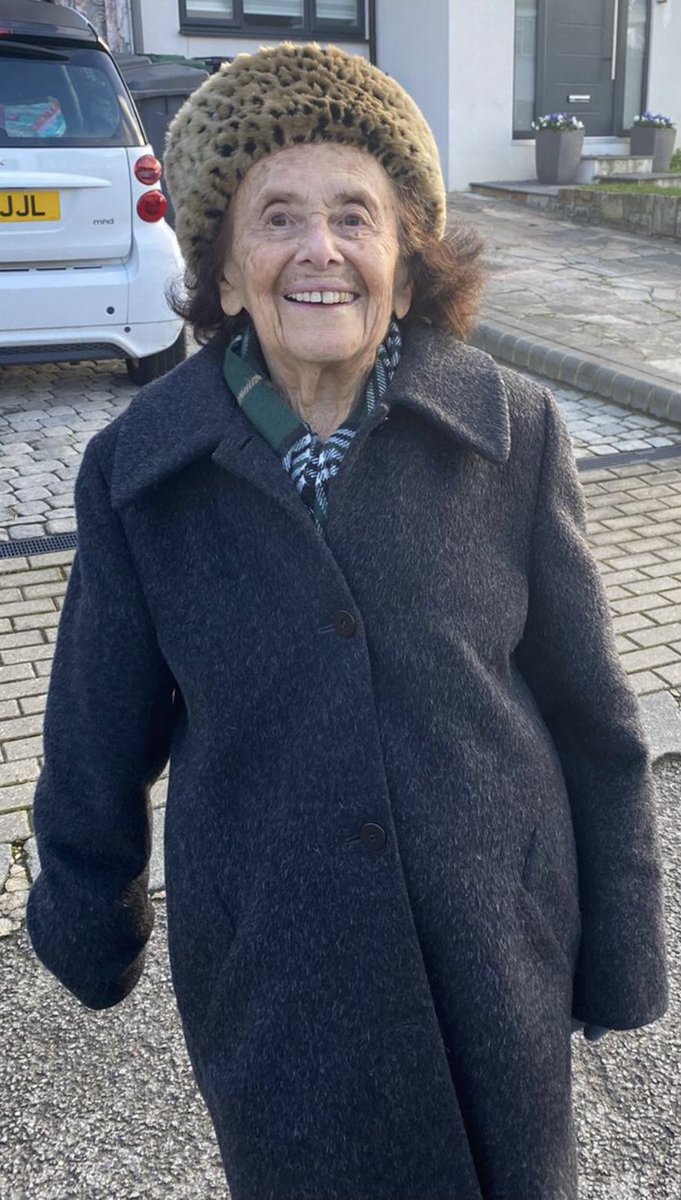 The response was extraordinary; the photo has since been retweeted over 17,000 times and has received more than a quarter of a million likes, with people from all over the world responding to send their well-wishes and express their admiration for Lily’s strength and bravery.

On the back of this unexpected reaction, Dov set up a TikTok account for Lily. At first, their videos mainly consisted of Dov introducing his great-grandmother and encouraging people to follow the account in order to have her story reach as many people as possible. But once they started building up a following, people quickly began expressing an interest in the details of Lily’s extraordinary life.

Soon enough, the account became dedicated to answering followers’ questions about the Holocaust and Lily’s experiences of it, with questions ranging from asking what they ate in the camp, to what happened to babies that were born there, and what the sleeping conditions were like.

She also remembered some Hungarian poems and recites them on the application.

No human anymore, but just a number

Though it is not always easy to answer all the questions she gets, she finds it a necessary act:

“Of course it is hard but if I could survive it, I can talk about it. And for the future, to ensure that something similar [to the Holocaust] cannot happen again, I have to talk about it.”

Lily’s most viewed video, now with over 20 million views, shows her answering the question,

“How did it feel to get your number in Auschwitz?”

Revealing a faded tattoo on her left arm, Lily confidently tells her followers:

“My number is A-10572. That is what I was, they did not call us by our name. We were no longer humans. We were only a number and we were treated like numbers.”

The video now has over 29,000 comments from people expressing their solidarity with Lily and gratitude for her honesty and strength.

However, despite the overwhelmingly positive reactions and encouraging words of support, like all social media platforms, TikTok comes with its downsides, too. For Jewish creators on TikTok, the fun comes with a hefty dose of antisemitism.

It seems as if the kids on TikTok are churning out a new trend nearly every week. The never-ending scroll of the “For You Page” sends users on a twisting path of all sorts of niches and topics. The app truly has something for every interest, from sea shanty challenges to tortilla wrap hacks to — antisemitic caricatures?

In May, around the time when violence was escalating between Israel and Palestine, Ebert’s account received a slew of hateful antisemitic comments. In one particular instance, under a video of Lily simply wishing her followers “a lovely, peaceful weekend”, and by a repeated similar wish in Hungarian, her native language, she added “Shabbat Shalom,” despite the mundanity and kindness of this video, it quickly became the subject of a swarm of hateful comments. it went even so far that she was called to be responsible for the conflict between Israel and Palestine. Another said, “Happy Holocaust,” while another said,

“Peace be upon Hitlar [sic]”

to one which asked if she believed the treatment of Palestinians reminded her of her treatment in the camps. All of this for a grandmother’s simple greeting. Sadly, this experience of antisemitic hate isn’t exactly unique. 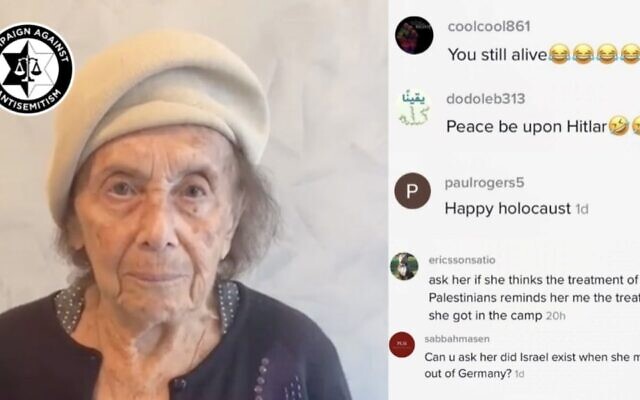 Although these comments were clearly abhorrent, unjustified and unacceptable, like everything else Lily and Dov handled them with the utmost dignity. Posting to Twitter, Dov wrote:

“Over the past few days my great Grandmother (Auschwitz survivor) and I have continued to receive messages of hate on Tiktok and Twitter… We will not allow this to stop us from educating about the horrors of the past, and what hatred can lead to. Hate only breeds hate.”

Hero Magnus, a university student and TikToker, explains how her Judaism-related content would often get slammed by offensive comments.

“The really vicious comments are usually from actual Nazis, and I just block and delete. When I was making a ton of Jewish content, I would get a couple of those on practically every video,”

“I often also got casually mean stuff from Christians or culturally Christian atheists who wanted to tell me that Judaism is backwards, cultish or stupid.”

Additionally, Jews of Colour on TikTok experience vitriol both from outside the Jewish community and within.

Shekhiynah Larks, a Black Jewish TikTok creator, describes that, in fact, most of the antisemitism she experiences on the app comes from white Jews and Black non-Jews, not Neo-Nazis.

“When I do receive antisemitic comments, it’s more coded with anti-Blackness at the same time,”

“It’s more people posting ‘free Palestine’ on my page and asking me how I can be Black and a Jew, I’m being brainwashed by white Jews, and that I don’t care about Black people.”

She also notes that many white Jews comment on her videos asking her invasive questions that probe into her Jewish identity and conversion, showing they don’t really view her as Jewish enough.

There are many white and white-passing Jews using their platforms to share information and educational resources about systemic racism and anti-Semitism and how one’s identities intersect and influence the way one is treated in society. This is great! Better yet, share resources created by Jews of Color (hint hint, nudge nudge).

While the invalidation of Jews of Color is rampant throughout the Jewish community in real life as well, on TikTok, these racist commenters may feel more empowered to voice their backwards views behind anonymous accounts.

Lily Ebert keeps going strong. She still wears the tiny gold pendant and shares its remarkable story with all those who have time to listen.

As part of their mission to teach people about the Holocaust and its devastating effects, Lily and Dov have now co-authored a book together called “Lily’s Promise: How I Survived Auschwitz and Found the Strength to Live.” to come out coming September.