With pleasure we want to let you know that we have been busy with building a place where people want to share with each other. For more than 27 years Marcus Ampe tried to bring the idea of sharing into our capitalist society. In 1995 he got a computer and started writing on the internet under different pen names, to spout his ideas and to ventilate his criticism on our squandering society. In the 1990ies, with some political activists it was tried to get some ideas in the Belgian political and economical system (further presented by Roland Duchâtelet his political movement

Vivant), like a standard income for every adult citizen and to bring more awareness about ecological matters.

On that part he continued in the lines of the “Kabouters” (the Gnomes), the political green-party of the 1960ies of which he was an active member in the late 1960ies early 1970ies, and which promoted already the idea of sharing goods with each other to lessen the waste of consumption goods [long before Agalev – founded in 1979 and transformed into Groen (Green) in 2003]. 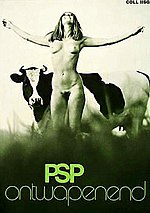 A famous and controversial 1971 election poster, reading “Disarming”, giving a good impression for what the movements of which Marcus Ampe was involved with stood for and why their actions in the conservative Roman Catholic country got them and Marcus Ampe so much in trouble.

Because of his ideas of people having to share with each other and helping each other to build a peaceful multicultural society in an ecological respected environment, Mr. Ampe, as a flower-power person or hippie, was many times attacked and considered to be a communist, though he always claimed to promote the ways of Christ and considering his expressing disagreement with the principles and particular outcomes of capitalism plus considering himself more as utopist or by some called Utopian socialist. Because of his non-violence attitude, e.g. on animal rights, some considered him as pacifist,  a “politically homeless“, as progressive liberal (charismatic) Christian having contacts and friends with leftwing socialists, orthodox Marxists, anti-Stalinist Trotskyists, left communists, liberal pacifists and some anarchists, to be a weak and to naive stargazer to avoid. Mr. Ampe was clearly very much influenced by one of his favourite thinkers, Charles Fourier, and reformers as Robert Owen, going for utopian socialism, even when he got so much adverse wind of socialists, drawing from early communist and socialist ideas.

Today he is still convinced that our current systems of monetary, social, ideological and border divisions are not working and endangering our species. Having come aware that too many of his ideals are perhaps not for this world he still keeps to many of his old ideals and hopes once there may come a new generation again prepared to oppose our war-machine and consumer society. He is still looking at mankind as people allowed (by the Most High Power) to live on this planet as attenders who have to come to show their mutual respect for each other and our planetary home.

For him it must not be that every single one of us, rich or poor, born into life-long slavery and bondage from which there would be no escape under the current system. There is still to do a lot of work to have more people come to see that we can liberate ourselves. Most of us may know that the system we are born into does not serve humanity, but very few of us know what to do to change it or are even willing to look for some change which brings more peace in the hearts of the people.

We can no longer sit idly, watching the destruction of our people, our communities, our countries, and our human potential, by greedy corporations supported by governments with no remorse for their actions, or accountability to the people they are supposed to serve. It should not be allowed that certain people earn 300% more than those who do the dirty job.

Along all sites there are certain groups and movements trying to bring fear and restriction of liberty, freedom of speech and freedom of religion. If we are not careful a lot fro what so many fought in the previous centuries will be lost again soon.

We can no longer sit silently, hoping that someone will do something to stop the assault on our liberties and future prosperity. It has fallen on the shoulders of the common people, to unite and create a new way … a new system … a future filled with abundance and prosperity for ourselves, our children and our grandchildren. The individualist centralist ego has to be silenced.

We should go for creating a totally new system free from economic slavery … where we turn competition into collaboration …  a new social structure where we all benefit from our collective efforts and individual talents …  a new world where people are put before profits, and the resources & materials are used to enrich all our lives.

Every single one of us is born in the image of the Divine Creator with valuable and unique gifts and talents and should be happy that he or she can have such talents.  Tat what we received for nothing we also should share with others and should use it for those who do not have such talents. When each individual uses his own talents to improve the lives of everyone around them, these gifts would not be wasted in mundane week-long positions of servitude making profits for those wealthier than ourselves.

Everything you see around you are things which came into being by people who used their hands and brains, and should all be articles created by people for people. Therefore it can not be that there are many who have so little.

The people are the gifts, the people are the power, the genius, the brilliance, and the vision that has created everything we see around us. Without the workers no factory can produce. So why should the society receive most of the gains, the bricks do not need the money.

We are told all the problems facing us are inevitable, that war, hunger and poverty are symptoms of the human condition and we need governments to protect us from ourselves. As many of us now realize, this is simply a lie to disempower us! All the decay, hunger, fear, and lack surrounding us are the direct results of the parasites profiteering off of us, which includes the governments we are told are there to serve us, but just do not come to protect and help the citizens of their country.

In the meantime all over the world we could find like-minded figures willing to promote the sharing of knowledge and materials.

In 2014 Robert Chatwin (robito) founded Wake Up World Education (WUWE) trying to collaborate with the world’s biggest global movements for change to help bring solutions into everyone’s life.  WUWE is contributing to this global movement for positive change by switching people on (or waking people up) to this solutions-focused reality so they feel energised, inspired and excited about the world we live in. They take Solutions Education into schools, workplaces, homes and communities, as well as providing a Free online course and offering the world’s biggest solutions to meet-up via their Weekly Circle.

The author of F-Day: The Second Dawn Of Man, a fictional account of humanity’s evolution into a society beyond money, and several video’s on YouTube, created a few years ago a Free World Charter, a social reform initiative that proposes 10 founding principles on which to grow an alternative moneyless society that is fair and sustainable, which Marcus Ampe also endorsed.

Colin Turner his work also includes the Freeworlder Free Sharing Network and HonorPay, a moneyless public awards system for expressing appreciation and gratitude. Many of the underlying concepts of his charter were originally inspired by Jacque Fresco’s Venus Project and Peter Joseph’s Zeitgeist film series – visionaries who, no doubt, would attribute their inspiration to many other historical influences too.

“Imagine the power of billions of acts of unconditional free-sharing and the positive effect that could have both on our society and the environment. Imagine how much more peaceful and abundant our world could be without the limitations and injustices of trade.”

Freeworlder: the world’s first truly free sharing network! No exchange. No credits. No barter. Just everyone sharing their excess items and skills!

Can you imagine the power of free, unconditional sharing, mulitplied by millions and billions of people? What kind of world would that be?

Can you imagine the problems we could solve if we didn’t need to trade in order to survive?

Can you imagine if the only thing that governed people’s behaviour was not the money they had nor the laws they obeyed, but rather the knowledge, respect and appreciation they had for each other and their environment?

This is why we built Freeworlder.com – to facilitate online what we all do every day – except to bring that trust outside our immediate circles, friends and family and around the world.

We are changing the world in baby steps. Today, we can share our small excess items, skills and knowledge easily. Soon we will build enough trust and confidence in the idea of unconditional sharing, that we can begin to truly re-organise our society for the mutual benefit of all.

“The Freeworlder Network” will go online this coming May. (We’ll let you know when the site is ready)