Time to be strengthened, thankful and to be prepared

One of the remembrance days about gifts and giving is Thanksgiving which, in the United States, is always celebrated as a national holiday on the fourth Thursday of November. In many countries all over the world in several churches the believers in God look at the Summer and what it brought to them. They want to remember all the good things the earth gave them and want to give thanks for the bountiful blessings they received from God in the past season and previous years.

Having the days shortening we can not ignore the darkness around us. We not only have the sun which goes under earlier, but are also confronted with the darkness of this world, people having gone far away from their Divine Creator and having lost the sense to love each other. We do know that in the end more darkness shall come over the world, lots of people setting each other up against each other. But we do know that we must strengthen each other as brethren and sisters, giving each other hope for a better world to come.

These darker days of the year we want to show others that there is some great person to look for who is the way to God and the way to freedom and peace. People may feel the black matter coming closer to them seeing turbulent global events begin to make their mark on Jews and their allies around the world and seeing how certain so called religious group wants to press others into their beliefs and/or want to govern the world.

Several people became frightened by the things which happened that just did not make sense.

Overnight, our cherished institutions, our icons, have collapsed. We don’t understand it. People blame this one and that one. It’s not just in the United States, it’s all over the world, and we have so many natural disasters, and so much illness. What is happening?” {Esther Jungreis – Messiah Coming}

Rabbi Rebbetzin Jungreis says God is bringing the world closer to redemption in a process called “chevlei Mashiach” – the labour pains of the arrival of the Messiah.

From the Scriptures we know that there shall come a time of Great Trouble. We also know that when such time shall come, when religion shall fight against other religions, and when we shall have more natural disasters, the time shall be ready for the Messiah to come to bring order in all things and opening or closing the doors of the Kingdom for the people who have to come in front of his seat.

Based on the writings of ancient Jewish sages, Jungreis concludes that this generation is replete with the signs that are prophesied to hail the coming of the Messiah, including endemic impudence, follower-ship, idol worship, disasters, and war.

“All our [sages] agree…they do not want to be present for the chevlei Mashiach, the birth pangs, because the birth pangs are going to be very painful… It’s going to be a generation that will abound in chutzpah [audacity]. Chutzpah will be colossal. Families will be fragmented. Children will turn against parents, parents against children. The elderly will not be respected. Youth will be worshipped.

“… The generation will be like the generation of the dog.  What does that mean? The dog runs ahead but always looks back to see if the master is behind him. Similarly, people don’t have their own opinions today. What is the media saying? The media is controlling the world…” {Esther Jungreis – Messiah Coming}

Lots of people are glued to the screen of their smartphone and may have a lot of virtual friends or Facebook or other social media friends but not so many real friends. Most of all the majority of people around us do love the material goods of this world. According to Rebbetzin Jungreis, the greatest avodah zarah or idol worship of this generation is money, an obsession which causes the Western world to ignore the lurking danger posed by Islamist terror against Israel and the United States.

“We have been very blessed, perhaps there was never in history such a wealthy Jewish generation as ours was. But there was no Hakaras HaTov, no credit to Hashem. “My strength did all this”. We became arrogant, we became chutzpahdik, we forgot Hashem… Imach shemam [their names be obliterated], the sons of Ishmael, every minute it’s “Allah”. The sons of Esav, “the Lord,” every minute. Their leadership is always speaking the name of G-d. Am Yisrael … they heard the word of Hashem panim el panim, face to face – has forgotten its G-d.” {Esther Jungreis – Messiah Coming}

We not only find a very low spiritual state of the Jewish People that has caused God to hide His face from them. By Christians we also find a majority clinging onto human doctrines and worshipping several gods and saints. Lots of them even do not know the Name of the Most High God or are against people who use God’s set-apart or Holy Name. Many even go over to celebrate a so called “birth of God” (though God never was born nor shall he ever die, but they talk about the birth of God His only begotten son), on the festival of the goddess of light (December 25) instead of celebrating Jeshua’s birth on his real date of birth.

The majority of mankind choose to reject God and will not honour His majesty and shall not respect His rule over the earth. But real lovers of God take these darker days to praise Him and to be thankful that He is our light in the darkness.

The two holiday-weekends to remember the death (November 1 and 11) brought the darker side of life in the picture, remembering that it was 100 years ago that there really did not yet come an end to useless killing. We may cling to life despite the painful burden of dark memories. That is the message we should carry. It should also be days that we where thankful for those who survived and/or made it possible that others could come to live in peace for some time.

Many forget also to think about the smaller matters, like having a good night rest, waking up in the morning to the sound of birds chirping, being able to walk or drive along beautiful sites, feeling the sun caressing the skin and the wind pushing us forwards.

These coming weeks we shall have some time to think about our attitude to all those small things which make our life more beautiful. We are going to face days that we can sit in a nice warm living room, whilst many others shall stay out in the cold with not much food and not many clothes. For lovers of God it should be a time to think about all those matters and to be thankful for what we can enjoy and have around us. It is also a time we can find more time to read the Bible. It is a way of gratitude for the things we get, that we can make a home for the Elohim His Word in our hearts.

For those who shall be free on Thanksgiving day and shall come together to have a nice meal, do not forget what is behind the idea of the holiday. thank God for all the things you may have and for the blessings which may come over your family.

Let the day after Thanksgiving day not be a mad Black Friday where shopping is the greatest priority. Be not taken by the greed of this world, but stay sensible about what you really need.

More Americans seem to travel between the Wednesday before Thanksgiving and the Sunday after the holiday than at any other time of year. AAA estimates nearly 51 million Americans travelled 50 miles or more from home for the holiday in 2017. When going places remember how it is possible you can travel to all such places and do not forget to see around you how the nature is a witness of its Designer.

Take all those moments of togetherness as a time to share the love of God and to show your thankfulness to Him and to those around you.

Many opportunities given by God

The Gift of Giving 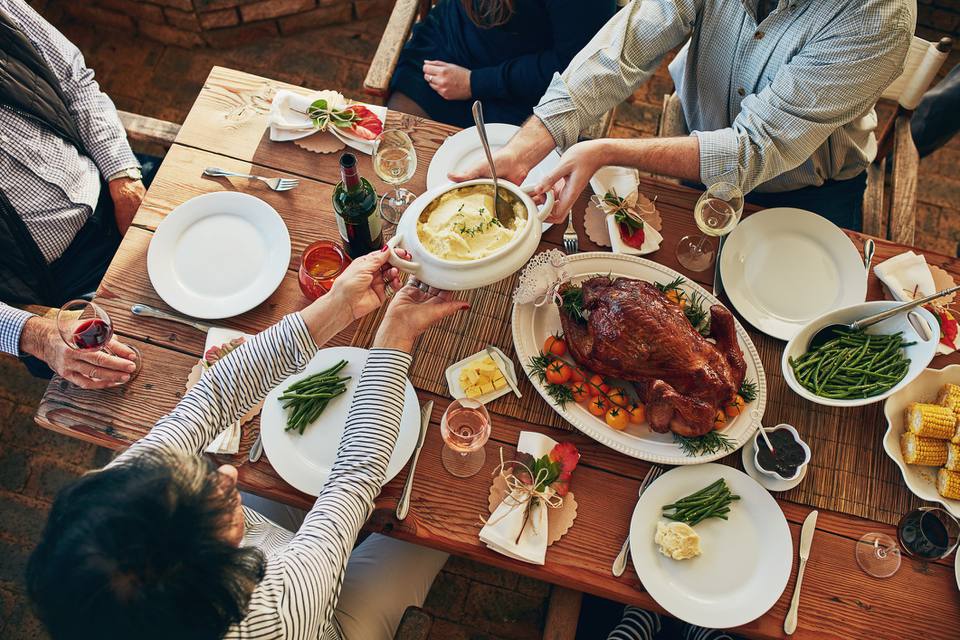