Last year 50 000  Jews left France for better pastures. In Belgium we also find many who preferred to go to Israel and to face the difficulties there between Palestinians and Israeli soldiers.

When rabbi Prosper Abenaim first arrived at La Courneuve’s Ahavat Chalom synagogue in 1992 there were over 4,000 Jews in the neighbourhood then and at that time it was a struggle to fit them all into the synagogue on Yom Kippur. Today, at this Paris suburb’s only Jewish facility, he serves sweet tea to his synagogue’s most frequent and reliable guests: machine gun-toting troops of the French Legion which entered the seen on January 2016 to defend Jews in this heavily Muslim and crime-stricken municipality bordering the capital. This dwindling community, which has lost thousands of congregants over the past two decades to Israel and safer areas of Paris has now on some mornings, troops outnumbering worshippers.

That wasn’t the case when Abenaim first arrived at La Courneuve’s Ahavat Chalom synagogue in 1992. There were over 4,000 Jews in the neighbourhood then and it was a struggle to fit them all into the synagogue on Yom Kippur.

“The shul overflowed onto the street,”

Since then, improved economic fortunes and repeated anti-Semitic attacks have driven out all but 100 Jewish families from the neighbourhood, where drug dealers operate openly on streets that residents say police are too afraid to patrol. The remaining Jews are mostly a greying bunch, stuck here for financial reasons.

“We have two big problems, extremism and criminality, and they often mix,”

said Abenaim, who lives in Paris’ affluent and heavily Jewish 17th arrondisement and has encouraged his congregants to leave for Israel.

“I understand why people don’t want to raise children here. I’m here myself only because of my duties. Otherwise, I’d be in Israel.”

Rudy Abecassis, a Marseille-born computer specialist who moved to the Paris region in 2009 to find work, had a good job at a time of rising unemployment. In 2016 his family also left behind their comfortable lives and moved to Israel, joining nearly 8,000 French Jews who Abecassis said

He had found a nice life in France and he loved France for it,  leaving it with sorrow. For him it being important

“to live in a Jewish country of our own, where we are not outsiders who need to be tolerated.”

Tolerance is the big word we have to look for these days. When we hear small children saying Jews are dangerous people we can wonder what they hear their Muslim parents telling about Jews.

Most Jews in France are not affiliated with any synagogue, while the majority of those who are belong to Orthodox synagogues. The third major current of Judaism in France is the Conservative or Massorti movement (with a.o. rabbi Haim Fabrizio Ciprian in Marseille). Next to them there are the Liberal and Reform Jews. The “Libérale” in French corresponds to the Reform movement in the UK and the US, though for some Americans its approach might appear to be midway between Reform and Conservative.

‘For French who do not have the American connection, if you’re Jewish, Israel is the easy place to go. Otherwise the other ambitious entrepreneurs of that age who are not Jewish and are not going to think of going to Israel tend to go to London, which is now the seventh largest ‘French’ city.”

In those suburbs Rabbi Michel Serfaty is not afraid to go to talk to the Muslims and to create events for Muslim kids. He also created a community or “French Jewish Muslim Friendship Association” for which he hopes to recruit several more young people to help with community outreach in the largely Muslim, immigrant communities where most people have never even met a Jewish person. 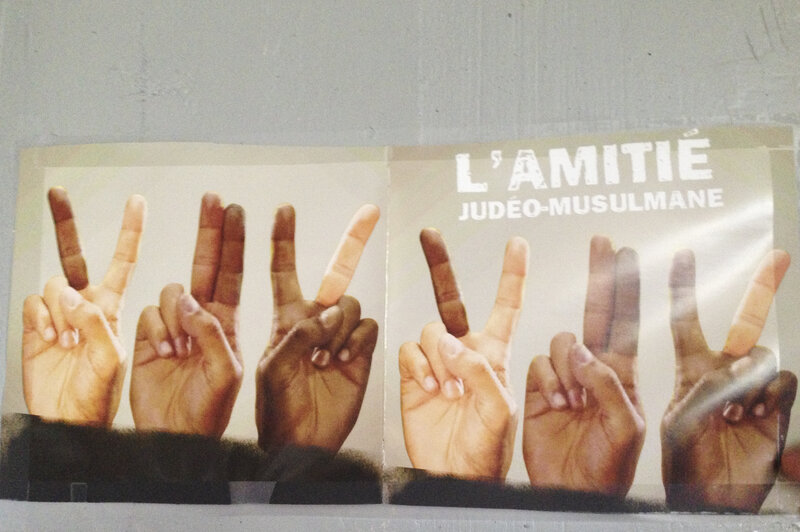 A poster for the French Jewish Muslim Friendship Association, which works in many poor, immigrant neighborhoods. – Eleanor Beardsley/NPR

The rabbi is convinced that Jews can live together in peace with Christians and Muslims as well with atheists. He also believes they can help and foster each other and can work together to build up France’s future.

“In these places they often have specific ideas about Jews,”

“And if they’re negative, we bring arguments and try to open people’s eyes to what are prejudices and negative stereotypes. We try to show children, mothers and teenagers that being Muslim is great, but if they don’t know any Jews, well this is how they are, and they’re also respectable citizens.”

The rabbi takes advantage of funding from a government program that helps youths without work experience find their first job. First of all Serfaty takes time for the Muslim youngster and unites them by creating opportunities to have games, like a football match together. Two days ago we could see on television how a coloured boy was proud to present his equip, which was constructed of youngsters from different origin. Serfati lets them feel how other young kids feel and have similar aspirations. He tries taking away the borders and wrong ideas their parents or some radicals imposted on them.

The rabbi offers them also tuition and for a period of three years, gives them valuable training in mediation and community relations. Serfaty’s recruits also study Judaism and Islam. And he takes them on a trip to Auschwitz, the Nazi concentration camp.

Though French laws on secularism forbid him from asking applicants about their religion, he tries to have also Muslim employees for his work, who harbour no anti-Semitic feelings, which is not always so easy to find.

The people helping the rabbi are aware of the task to are wake up people’s consciences. They say

“This is a job that counts and we could have a real impact if there were more of us.” 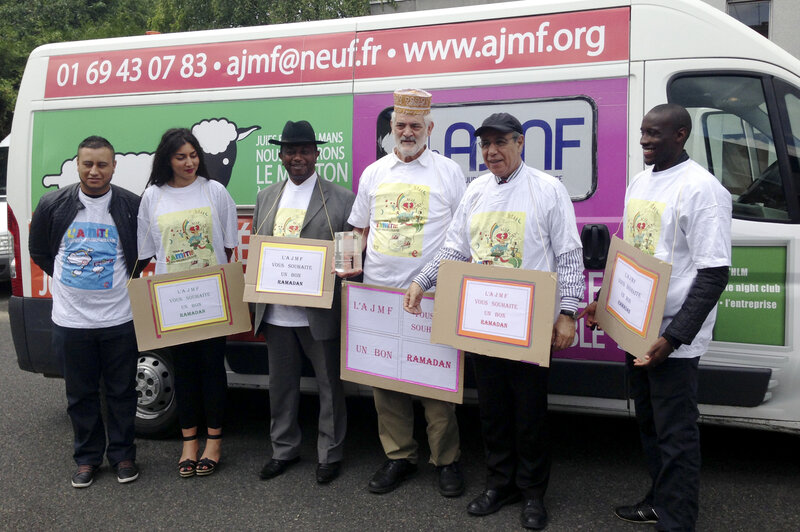 Rabbi Michel Serfaty, third from right, and employees of his French Jewish Muslim Friendship Association. He says he has only grown more determined to do his bridge-building work since the terror attacks in Paris in January. – Eleanor Beardsley/NPR

Now there is also signed a manifesto where is demanded that the fight against this democratic failure that is anti-Semitism becomes a national cause before it’s too late. By the people who put their signature under it can be found politicians from the left and right including ex-president Nicolas Sarkozy and celebrities like actor Gerard Depardieu.

The signatories condemned what they called an “quiet ethnic purging” driven by rising Islamist radicalism particularly in working-class neighbourhoods. They also accused the media of remaining silent on the matter.

“In our recent history, 11 Jews have been assassinated — and some tortured — by radical Islamists because they were Jewish,”

“French Jews are 25 times more at risk of being attacked than their fellow Muslim citizens,”

according to the manifesto.

“French-Jewish families are being forced from their homes in Paris suburbs as Europe continues to be convulsed by levels of anti-Semitism not seen since the end of the Second World War.

Rue Gabriel Péri, a pedestrian zone in Saint-Denis, in 2012.

The Paris commuter newspaper 20 Minutes documents an “internal exodus” during 2017 of Jews from the Seine-Saint-Denis department, saying

“it is emblematic of broader concerns that French Jews, like their brothers and sisters across Europe, are finding it increasingly difficult to reconcile their faith with the changing demographics of the continent.”

Who would ever have thought that after the lessons of World War 2 we’d see this sort of thing in Europe again. Well, we are, and we may not do if our node bleeds, or turn our heads when a car drives over the pavement to hit Jewish pedestrians, or have our ears shut when people shout

The third largest Jewish community in the world has seen growing anti-Semitism in France since the 2000s. Increasingly, the Jewish community in France no longer feels safe. The most salient events were the murder of Ilan Halimi in 2006, the attack on a Jewish school in Toulouse in 2012 and the attack on the Hypercasher in Paris in 2015. These three events alone accounted for the murder of nine Jews, including three children who were murdered at close range.

In 2014, there were 851 antisemitic acts of violence in France as recorded by the Protection Service of the Jewish Community.  Indeed, some Jews in their private lives in France have given up wearing their kippa or the Star of David for fear of insults or aggression. This video from 2015 shows the kind of intimidation a Jew can face depending on what part of Paris they walk through.

The Aliyah In Israel

The growing antagonism towards them has led some French Jews to make the drastic decision to leave the country.

For several decades now, Jews in France have been leaving for Israel. The attacks of 2015 doubled the figure of departures, which is now about 6,000 to 7,000 per year. Following the 2015 attacks, Prime Minister Benyamin Netanyahu traveled to Paris, and while there did not miss the opportunity to mention that Israel was open to French Jews. The president of the Jewish Agency for Israel went further, stating that there was “no future for Jews in France.”