Do you still look out for your morning or evening paper Many years ago, for our archive several international newspapers came on our table to be read and to be cut, having all the newspaper clips to be glued and put in maps, classified, and registered on recording cards.

Also several magazines got read and articles with target words registered on the recording cards. Thousands of magazines and newspaper-cuttings making the floors to heavy, making it necessary to have the archive moved to special constructed buildings.

Ourselves having become a certain age, leaving most work to the newer generation now may look at previous history. But what about reading all those newspapers and magazines? 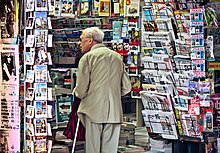 From his base in Los Angeles, an American blogger Brad Nixon who considers the endless adventure of living in the American West: life, culture, history, architecture and travel in California, Arizona, Colorado, Montana, New Mexico, Nevada, Oregon, Washington, even Alaska and likes to write about travel elsewhere in North America, Italy, Great Britain, France, China and anywhere else he goes. He considers himself a lifelong newspaper fan, like we are. He also still relish picking up the local newspaper in airports, bookstores, gas stations and restaurants.

There’s nothing more appealing than a well-stocked news stand.

he writes in his article “Morning Paper: Where Worlds Collide“. 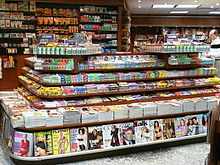 A newsstand in New York City

Though when we look at the newspaper stands of today, we see that the meters provided for the papers has reduced with more than two thirds if it is not more. The choice is reduced a lot and there are no different editions any more for morning, noon, afternoon and/or evening papers. In Belgium you still may have “Le Soir” but it is not any more a real evening paper. Great-Britain can be proud to have still some very good evening papers, and excellent morning papers as well as Sunday papers. At the continent the Sunday papers are long gone. When Brad Nixon is lucky enough to travel abroad, he makes a stab at reading the foreign languages in which Le Monde, Corriere della Sera and the Times of London are written.

I grew up reading syndicated columnists who appeared in the Cincinnati Enquirer, although they wrote for newspapers in Chicago (Mike Royko), Washington (Art Buchwald) or Los Angeles (Jim Murray), not to mention Cincinnati’s own Bob Brumfield.

I no longer subscribe to a printed newspaper of any description: world, local or neighborhood coverage. The days of sitting at breakfast and leafing through one, checking the sports scores, reading the comics or doing the crossword are things of the past here at Rancho Retro.

Nothing more clearly demonstrates the impact of technology on the flow of information than the topic of print versus online news.

Still an avid news reader, I rarely fail to spend a measurable amount of time on the websites of the LA Times, New York Times, BBC and a few others, including the newspaper that covers my portion of Los Angeles, The Daily Breeze.

I’m not entirely satisfied with that situation. There are aspects of turning the pages of a well laid-out newspaper that can’t be replicated by even the best websites. Granted, there are no hyperlinks to related material, no streaming video and just as many advertisements in print as online, but there’s nothing like a newspaper for those serendipitous discoveries, those full-page spreads of news or features from every part of the world. Also missing from newspapers are the irritating full page pop-up ads that block the screen (I’m looking at YOU, latimes.com). {Morning Paper: Where Worlds Collide}

The nice thing about a newspaper is the space some writers may get to go deeper into things and to give an analysation of facts which can be looked at and enjoyed so many hears later.  Those articles of human interest and critical viewing proof the value of a newspaper and their writers.

New York, New York. Newsroom of the New York Times newspaper. Reporters and rewrite men writing stories, and waiting to be sent out. Rewrite man in background gets the story on the phone from reporter outside. (Photo credit: Wikipedia)

Though today one can wonder how they are able to survive. For sure they too have to go the digital way. And to be honest we have fallen also for such electronic reading and digital classification. But to be honest to have a newspaper on your lap or on the table often gives an other feeling and ‘band’ or ‘bound’, allowing to have your mind going through an other world than the one we are sitting at that moment. It feels like it gives an other connection than the computer, laptop, i-pad or tablet. Those latter ones reducing the paper to some text fragments ‘expanded’ (Stripped of their writer’s wedding). Is it a nostalgic feeling touching our heart?

I feel divided, because I know that, ultimately, only a fraction of the existing printed newspapers (already a paltry set of survivors from a few decades ago) will endure as more readers (including me), cancel their print subscriptions and read online. Rather, I suppose, many papers will persist, but only online, and there’ll be no more morning coffee with that page of box scores from yesterday’s baseball games open in front of me (or I could turn the page, study the entries for the day’s racing at Santa Anita Racetrack, and mark my choices with a pencil).

I particularly mourn the loss of those local newspapers — many of them weeklies — that have disappeared or certainly will, including the paper that served my Midwestern hometown for more than 150 years before it closed up shop. Journalism and journalists continue, but their old order is rapidly fading. {Morning Paper: Where Worlds Collide}

Since the 1950s the newspaper market has been in decline in Belgium. At that time 50 Belgian National papers and hundreds of local (village) papers could attract the eyes of their interested readers. for the National papers in 1965 30  could be found over the counter. going up for a few years up to 33 in 1980, 32 in 1995 to reduce up to 23 newspapers in 2000 of which many were very similar, only having a different name, but form the same editor or owner with only 10 owners on the market. With the big media groups Corelio, Concentra, De Persgroep, Roularta Media Group for the Flemish papers and Rossel for the Walloon papers, and Mediafin for the economical Walloon paper L’Echo, Grenz-Echo Verlag for the German Grenz-Echo and The Brussels Times for the English The Brussels Times (daily digital newspaper and print magazine). There is also Politico Europe, better known for its website but it also has a weekly paper edition, and further Europolitics and New Europe, newspaper focusing on EU affairs.

In the Netherlands in 2009 the number of Dutch newspapers was only 35. There and in Belgium the Telegraaf Media Groep has difficulties whilst the De Persgroep (Nederland) keeps the Dutch critics giving some paper to reach the public. NRC Media after a merger of the Amsterdam newspaper Algemeen Handelsblad since 2015 is ran strongly by the Belgian company Mediahuis. While considered one of the Dutch national quality newspapers next to de Volkskrant and the very conservative orthodox Protestant Trouw (De Persgroep), NRC Handelsblad sees itself as the most internationally oriented of those three, and has been labeled leftliberal. The largest group amongst readers switching to the Nederlands Dagblad comprises non-Christians looking for an alternative view from that of the mainstream Dutch press. Headquartered in Apeldoorn and associated with the Reformed Political Party the Reformatorisch Dagblad is one of only a handful daily national papers remaining in the Netherlands. The Amsterdam’s Parool may count street sales circulating approximately 20,000 and substantially more on weekends.

In Flanders De Standaard (Mediahuis, formerly Corelio and VUM) as Christian-Democratic and Flemish Party in opposition to the the Socialist Flemish daily De Morgen, are the best Belgian newspapers left over.

Lots of people in Holland and Belgium use their mobile phone to look at the headlines for the day. Also the social media is pilfering lots of ‘printed paper’ readers. 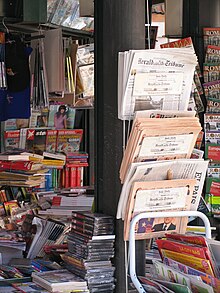 Newspapers: a global industry in transition as an old paper-based technology confronts the age of the Internet and smart phones

The decline of newspapers has been widely debated, as the industry has faced dropping newsprint prices, slumping ad sales, the loss of much classified advertising and precipitous drops in circulation. In recent years the number of newspapers slated for closure, bankruptcy or severe cutbacks has risen, especially in the United States, where the industry has shed a fifth of its journalists since 2001.[1] Revenue has plunged while competition from Internet media has squeezed older print publishers. {decline of newspapers}

What’s your preference: print or online? Or both? What’s better about one or the other? Please add a comment. {Morning Paper: Where Worlds Collide} 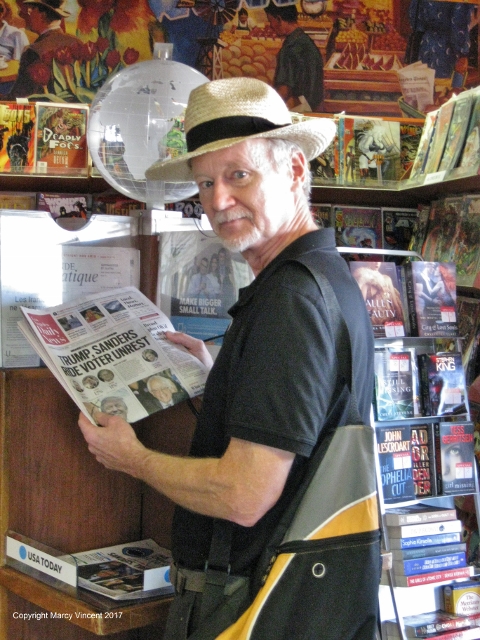 Brad Nixon fascinated, even in a country where he can’t actually read any of the newspapers.