The twist of politics and expression

A retired public school administrator and history professor says political polls asked people all across the nation how they felt about issues and adds that hey have been publicized in the mass media and questions how minorities would not being protected?

Our laws call for equal justice for all. The problem is that certain segments of our society are in denial about some of the crimes committed in our country. For example, the Black Lives Matter supporters blame the police for the killing of a few black people some of whom had criminal records.  But they ignore the fact that the greatest killers of black people are other black people. In Chicago, the murder rate of black on black is greater than the casualties we suffered in Afghanistan. So why doesn’t the Black Lives Matter supporters focus on the greatest killer of young black men? {A Progressive Anti-Trump View Point With My Rebuttal}

That America where effectively a lot of killing goes on between the black population by their own skin-coloured compatriots, could once more shake Europe with something they never would have expected and would not have hoped for.

A great problem of the States and Europe is that they had to undergo a terrible stock market crash and a period with lots of job losses. Both parts of the world also had to face a lot of people becoming poorer.

According to federal government statistics, we have more poor people now than ever before in our history. Ever since Lyndon Johnson started to spend billions on welfare and food stamps through his War on Poverty, poverty has INCREASED not decreased. Under Obama, according to federal government statistics, our nation now has more people than ever before. Obviously throwing money at the problem has increased poverty, not decreased it. {A Progressive Anti-Trump View Point With My Rebuttal}

ObamaCare is a total disaster.  Need I remind you that the Democratic Party politicians NEVER included Republicans in the drafting of the law. They refused to work with the Republicans.  So the high premiums and high deductibles which make ObamaCare unaffordable is entirely the blame of the Democrats. {A Progressive Anti-Trump View Point With My Rebuttal}

He seems to forget Obama Care could not really be worked out as envisioned, because the republicans worked against it. It also had to face the difficulty, that though the U.S.A. claims to be a Christian nation there is not much Christian love for sharing with the weaker and needy ones. A lot of American citizens seem to care most for their own self little cocoon and all the rest they do not bother how they can manage.

For Europeans all what is going on in the states should be a portent. We should be aware of the dangerous harbinger showing very similar situations we have already encountered with the Weimar republic. In the twenties and thirties of previous century there was also a nation where there was a big difference between those who had money and those who had to fight every day to have some bread on the table. Last century Europe also face a crisis which made them very much afraid of all that was foreign or different than the main stream. Also then we saw a man with a big mouth shouting load and promising a lot.

This time it was at the other side of the ocean that some bigger or larger man used similar rhetoric tricks to get the majority of people on his hands.

Those who had other viewpoints at that time were not tolerated and often considered traitors. Something we also found a man of the American senate calling Hillary Clinton and demanding her to be put on the electric chair. It is not because the U.S.A. is called the land of the free that they are really so free.

Trump has done nothing to violate the freedom of people. He isn’t even in office yet.

though did he not give enough signals that he would love to limit the freedom of many?

It is the protestors who are either unwilling or unable to accept Trumps’s selection in a democratic process.  They are the ones who are creating the violence. When Obama won his elections, there were NO demonstration or violence committed against his supporters.

I agree with him that violence should not be permitted, in no circumstances, but to call Trump a full democratic process is to lay violent hands on the truth. In the U.S.A. people with not enough money never will make a chance to become a presidential candidate and once the are in, they have to count on people or worse organisations funding them. that the one with the biggest mouth can force them to step down, you can call part of the democratic system, so no objection to that. It is up to people to hear what a person is promulgating. It is up to the listeners to examine what that person in front of them is enunciating and if his or her words are filled with the truth or are distorting the truth. In the case of Donald Trump they seemed to be deaf for all the lies he told and for how he switched from one side to an other, turning like the wind. He could uncap whatever he wanted and they all wanted to take it in like sweet buns. The writer thinks we in Europe must be taken by all the propaganda, because most of us seem to have a distorted view of what is going on in America, and perhaps in the world.

What I find strange the writer of A Progressive Anti-Trump View Point With My Rebuttal does not seem to see the difference of what the bible-scholar Bijbelvorsers wrote and on what he reblogged, taking everything what was reblogged on the Stepping Toes article A Progressive Call to Arms as the writing of Bijbelvorsers though the reblog was of an article the bible-scholar wanted to lay in front of the readers to think about it. By doing so the reactor to that article also misses the point of such reblog, and also of such a writing on Stepping Toes, where I created a site where people should be able to come together to talk about controversial matters.

The second part the retired schoolmaster is referring and commenting to is a text written by theindependentthinker2016. I must commit it disturbs me we are not given more information who this can be, or which organisation may behind that name. But that does not make me to disagree with a lot that writer tells us.

I also would love to ask the readers on this readers digest and on the other lifestyle magazine to think about their way of going on with politics, willing to see what is going on or wanting to close an eye for certain things. 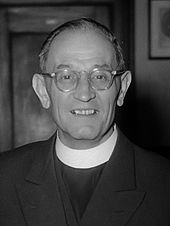 Niemöller, author of “First they came …” at The Hague’s Grote of Sint-Jacobskerk in May 1952

I too would like to call to remember what the ex-naval officer and commander of a German U-boat in World War I wrote. He also had faced a man who wanted to have control over everything, including the churches. Until his arrested by Hitler’s secret police, the Gestapo, he was not afraid to open his mouth and to defend those who had no voice. We as Christians should come up for the weaker ones in society and should look at what happens in the world, if it can endanger man, animal and flora.

Christians also should take care that we do not have a second generation to have a collective guilt. Lecturing widely, Martin Friedrich Gustav Emil Niemöller spoke freely in favour of international reconciliation and against armaments.

Like there has been given a call on the lifestyle magazine Stepping Toes, to remember his famous statement and provocative poem, I also would repeat that important saying here also:

First they came for the Socialists, and I did not speak out—
Because I was not a Socialist.

Then they came for the Jews, and I did not speak out—
Because I was not a Jew.

Then they came for me—and there was no one left to speak for me.

Let us always be prepared to stand ready, to defend those without a voice and those who are oppressed.
I also express my hopes that we shall not have to face such cowardice of American intellectuals following the rise to power and subsequent purging of his chosen targets, group after group.

Please do find both articles

the original A Progressive Call to Arms

the repost A Progressive Call to Arms

the reaction A Progressive Anti-Trump View Point With My Rebuttal