Artists are the voice of or for society. They are the ones who look at things, analyse the situations and try to warn the people around them.

At 1:00pm on Tuesday, May 9, 2017 at Radio City Music Hall  the New York City’s School of Visual Arts had activist and icon Gloria Steinem spokeeaking urgently on the state of the union at the College’s 41st annual commencement exercises.

On Tuesday, beginning around noon, a sea of buoyant figures in swirling red gowns descended on Rockefeller Center in New York City. Slowly disappearing into Radio City Music Hall, the some 1,170 students were gathering for commencement and graduation from the School of Visual Arts. In the auditorium, their robes billowed out over the velvet-red seats; the resulting camouflage effect seemed symbolically appropriate as a nod to their shared experience at SVA, in a last, unifying moment before they dispersed to start the next chapter of their lives.

Kicking off the program was a speech by Allison R. Schaller, soon to be an alumna with a BFA in Photography and Video.

“As artists, we can think up anything. But it’s the creating, the doing that’s important,”

“We know many of the world’s problems, and largely the actions we need to take, it’s acting on that knowledge that’s challenging. But luckily for us, we now have a leg up, as we are armed with an education. Find a cause you believe in, find something you are great at, find a passion and make it yours. And please do so with empathy for others.”

SVA President David Rhodes spoke about how citizens in a democracy have an obligation to parse out the truths in the deluge of information circulating in public discourse.

Writer, lecturer, political activist, and feminist organizer Gloria Steinem when stepping up to the podium remembered that she grew up in Toledo,

” hoping, praying to be a Rockette.”

“I want to say to my 10-year-old self, I’m on the stage of Radio City Music Hall, and this is better!”

she declared to a cheering audience.

Addressing the students, Steinem implored them to realize their power as visual artists — namely, in their ability to appeal to sensations, even instincts, shared by all humans.

“To be universally understandable is to have the potential of bringing diverse people together, undivided by different languages or degree of education,”

The work that writers do, in contrast, takes shape internally, subject to the whims of consciousness, which are as fleeting as they are inscrutable, she implied.

“My joy in writing comes from having an idea and then from finally achieving it,”

“But not so much from the tactical, visual and sensory processes in between.”

It was not lost on the room that Steinem’s calls for unity had uncommon urgency.

“We are in a time of maximum change. On the one hand there is great danger, and I am not for a moment diminishing how great that danger is, and on the other hand, we are woke! I have never in my life seen so much organic, sustained, enthusiastic, inventive, created, and fan-f..cking-tastic activism as I did doing the March on Washington.”

I think we have come to a time where artists of all breed have to come out stronger again. It is perhaps not bad we can see a movement again like we had when we went on the barricades in 1968. Our egocentric capitalist society needs again some voices to bring awareness about climate change and our way to live.

Steinem looked back at the more recent march and said

Steinem raises a fist after being presented with a Doctor of Fine Arts degree by Glaser (left). Photo Copyright © 2017Joseph Sinnott.

“What we remember are the symbols, the hats! It’s a rebellion of the visual arts, the arts of the heart, the arts that are not limited by language, not limited by technology.  There’s so much to be learned if you go beyond your boundaries and now is the time we need to blast those boundaries.”

“the arts of the heart,”

and cautioned them that from her experience, revolutionaries have to proceed in a way that will renew a world they want to be a part of.

“If you want to have fun and laughter and sex and poetry and music at the end of the revolution,”

she said, beaming at the cheering graduates and their families,

“You have to have fun and laughter and sex and poetry and music on the way.”

Reacting against the bad way our society is moving should not limit us to have fun at the same time that we react against the wrong going. By our creative work we can give criticism and can show a reflection of how our world is evolving, treating its past and showing where it wants to go. We need more artists who hold the mirror in front of us, like Rabirius does, for example.

Reflection to awaken the people around us. By all the social media and advertisements they have been taken asleep. So many are not any more interested in the welfare of animals and plants and think

Many like the present president of the U.S.A. are not interested in bringing the truth and are more concerned about their own positioning and ‘shining’ in the world. Many are even prepared to walk over corpses if necessary to create a better position for themselves. Others are just happy when they have their gadgets and daily fun.

Today we also can see lots of people are looking for the communal fun, to feel the vibration of togetherness, having the idea they may be between like minded people. Lots of festivals are “in”. It reminds me of the time we had also the many festivals, Woodstock being our ‘greatest one’. Now the Belgian organisers of ‘Tomorrow Land‘ manage to create a magic world and incredible worldwide feeling of unity again. They claim

We believe in enjoying life to the fullest without having to compromise everything. We are responsible for the generation of tomorrow and respect each other and Mother Nature. Respect, Health, Nature, Responsibility and Innovation are the five circles of Love Tomorrow. The Heart is the inner circle, representing passion, love and respect.

We can only hope that those who go and visit such Fantasy World festival shall come to think further their than the entrance gates of their magic world and shall rally spread that love and respect. 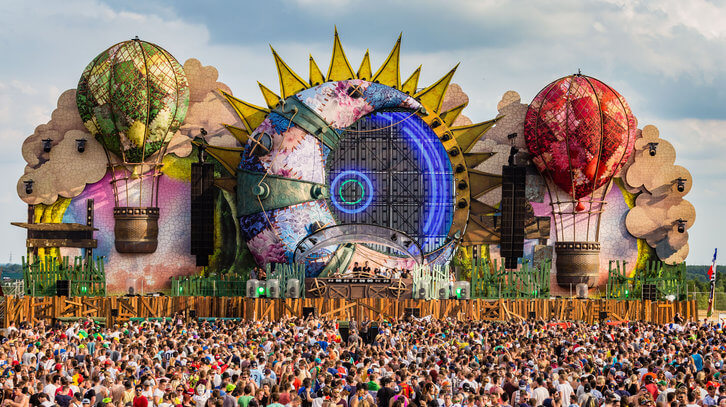 Let us hope they may meet others from all over the world to keep contact with and to exchange ideas, but also to get a preparedness to react to our present world and how politicians are screwing the people where they are standing next to them.

In any case it has become high time for the artists to let their political and world views be shown in their work again to bring a ‘voice to think’ again.