The Catholics may have started their Lenten Season and try to lessen what they normally would eat and cut in entertainment activities. When we look around us we may find a few people who want to take the time to go over to a willing abstinence or reduction from some or all food, drink, or both, for a period of time.

Many religious observances have fasting in their program.

You should know that it is not bad to have every year some cleaning of the body and mind. Also in the house many may do a Spring cleaning. Abstinence from food or drink or both may be done for health, ritualistic, religious, or ethical purposes. All over the world we can find peoples taking abstention which may be complete or partial, lengthy, of short duration, or intermittent. Fasting has been promoted and practised from antiquity worldwide by physicians, by the founders and followers of many religions, by culturally designated individuals (e.g., hunters or candidates for initiation rites), and by individuals or groups as an expression of protest against what they believe are violations of social, ethical, or political principles.

Since at least the 5th century bce fasting has been used therapeutically. The ancient Greek physician who lived during Greece’s Classical period and is traditionally regarded as the father of medicine, Hippocrates recommended abstinence from food or drink for patients who exhibited certain symptoms of illness. 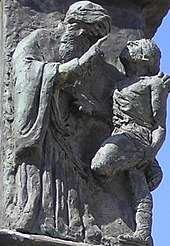 Detail of the Knesset Menorah, Jerusalem: Hillel the Elder teaching a man the meaning of the whole Torah while he stands on one foot

In almost every rabbinic book we can find mention of 9 Adar as a fast day. Though we must admit that during the last 2,000 years, not many Jews actually observed it. According to tradition, 9 Adar was the day on which initially peaceful and constructive disagreements between Beit Hillel and Beit Shammai, the two great schools of thought during the Mishnaic period, erupted into a violent conflict over 18 points of law. The 1st century Jewish scholar Shammai was the most eminent contemporary, an important figure in Judaism‘s core work of rabbinic literature, the Mishnah, and the halakhic opponent of Hillel, the highest authority among the Pharisees (predecessors to Rabbinic Judaism), founder of the House of Hillel school for Tannaïm (Sages of the Mishnah) and the founder of a dynasty of Sages who stood at the head of the Jews living in the Land of Israel until roughly the fifth century of the Common Era.

Hillel was the head of the great school, at first associated with Menahem the Essene, who might be the same Menahem the Essene as the one mentioned by Flavius Josephus in relation to King Herod, afterward with Shammai, Hillel’s peer in the teaching of Jewish Law. The family of Jesus Christ also belonged to the Essenes.

Hillel and his Torah colleague Shammai were both disciples of Shemaya and Avtalyon as well as the last of the Zugos. (The five generations of Zugos were Jose ben Joezer and Jose ben Jochanan, Joshua ben Perachiah and Nitai HaArbeli, Judah ben Tabbai and Shimon ben Shatach, Shemaya and Avtalyon, and Hillel and Shammai.) Both were fearless upholders of the Torah’s honour, standing up to Herod and brooking no mockery of Judaism.

Due to increased Roman persecution, Hillel and Shammai their disciples were unable to analyze new situations as deeply as Jewish scholars once could. As a result, the emerging scholars broke off into two schools of thought, known as Bais Shammai and Bais Hillel or Beit Hillel and Beit Shammai, and wound up disputing more than 300 cases. This beginning of large-scale argumentation (machlokes) is viewed by the Talmud as a sad diminution in Torah scholarship, which, due to the lack of clarity, had drastic results for the Jewish people.

At first the scholars personally treated each other with great love and respect. But according to various sources 9 Adar was the day on which initially peaceful and constructive disagreements between Beit Hillel and Beit Shammai, erupted into a violent conflict over 18 points of law, killing as many as 3,000 students in the fighting which should have been avoided.

We can take 9 Adar as a cautionary tale. There is a timely and pressing need to examine how the model of machloket l’shem shamayim (dispute for the sake of Heaven) between Beit Hillel, which produced 14 generations of great leaders, spanning nearly 400 years, and guiding the Jewish people through some of their most difficult times, and Beit Shammai devolved into a Jewish civil war. The lesson from that occasion is that

if we don’t work to resolve conflict peaceably and in a way in which everyone walks out stronger and the community is strengthened,

9 Adar, may be looked at as a day we should recognize the urgency to impart skills for constructive conflict to future Jewish leaders and therefore the Pardes Center for Judaism and Conflict Resolution has therefore chosen this day to be the international Jewish Day of Constructive Conflict (machloket l’shem shamayim), dedicated to both the study and practice of Judaism and conflict resolution.

People need to have their minds open for different thoughts. They should always try to negotiate with those of other opinions and should always remember that all people are creations of the Most High, in His image, which we should show respect.

As in any community there may be different thoughts or different schools. All created in the image of God should respect the others around them. We also should know that nobody can know everything, but God. We as fallible human beings shall have to try to work things out. God has given us time to do that. He also has given His Word and His Law, which we remembered this last weekend. That Torah or Written Law should be our guide. We should follow those instructions.

There are 18 ways you or your organization can participate in your home, workplace, synagogue, school and community, recalling the 18 matters over which the conflict erupted.

On this day it is also important that we do think about the reason why we received the Torah and how we should use it as a guide to construct our life. If we want to be a Child of God we should behave like one. As children of God we do have to feel like brothers and sisters of each other, respecting and loving each other, trying together to please our heavenly Father.

When we treasure our friendship with the Most High Elohim Hashem Jehovah, we should strive to please Him in every aspect of our life, including our thoughts. Preparing ourselves for the coming period, living up to Erev Pesach or 14 Nisan on Monday April the 10th in 2017 and hoping to have a joyful Pesach the next two days days, we may take the coming days to think how we can better our life and cleanse our inner soul. Fasting, or trying not to be tempted by certain things we so love, is a good way to train our self.

Everybody has to work at himself or herself to come to have “a pure heart”. This has to happen by focusing our minds on what is chaste, virtuous, and praiseworthy. (Ps. 24:3, 4; 51:6; Phil. 4:8) Granted, Jehovah makes allowances for our imperfect nature. He knows that we are prone to improper desires. But we do have to recognize that it saddens Him when we nurture wrong thoughts instead of doing all we can to reject them. (Gen. 6:5, 6) Therefore let us remember those squabbling studious Jewish followers of Hillel and his Torah colleague Shammai, and make sure that we do not fall in the trap of discussing so much smaller things that they grow above our head into something which would bring us to fight and do something against the Will of the Most High.

Going up to the days of Pesach we can take time to meditate on the Word of God plus His Works and to reflect on our way of living. It can be a good thing to avoid being tempted to eat or drink certain things we love, and to stand still by those who were going day in day out through the desert, hoping to find the promised Holy Land soon. We too still have our hopes on the Holy Land and look forward to see it coming to a time of peace. We therefore should take enough time to consider what it is what God wants and to come to accept that Jews, Christians and Muslims should all be partakers of that Holy Land. In the end all the world should know that the Kingdom of God shall be the place for all lovers of God, no matter from which school they came of from which denomination they were part of. Jerusalem shall be the capital of God’s Kingdom here on earth and there shall be place enough for all those who want to do the Will of God.

Doing the Will of God should be our aim. To do that Will of God we may only worship One True God and keep ourselves away form all sorts of heathen rites and traditions. So, if you want to fast, do it, but do it with a pure heart, not mixing with pagan traditions and keep your thoughts chaste or spotless. An important way to show our complete reliance on Jehovah is by making our fight against unclean thoughts and staying restraint a matter of prayer. When we draw close to Jehovah in prayer, he draws close to us. He generously gives us his holy spirit, thus strengthening our resolve to resist immoral thoughts and remain chaste. Let us these days remember that and let peace grow in our hearts and share it with others around us.

From the Ramadan into the eid

Reactions against those of the other sex