Having a problem with wonkiness…

In the European Union there are so many rules and regulations that certain things become a little bit ridiculous or do more damage than good.

When looking at the food stands, is there something you notice?

We have been trained to look for “beauty” and became accustomed that vegetables have to look a certain way to be good.

Beauty standards for food? Sounds crazy right? The function of food is to nourish and fuel our bodies, and yet every day, without our input or knowledge, perfectly edible food is being discarded around the world because it does not fulfil an arbitrary standard.

And to be clear, this is not a standard of whether it is edible, it could be that it’s been classified too small, too big, too pitted, blemished… wonky. Sounds familiar right? A standard on aesthetics that is being imposed by invisible faces. We treat our food like we treat out bodies – as items that need to be perfect, blemish free, symmetrical and picture-perfect. This is utter lunacy – and hugely damaging.

Whilst millions struggle to ‘achieve’ a certain beauty standard promoted through fashion and social media, farmers and producers around the world are struggling in a similar way – trying to produce food, yet control nature to fit the box of what others have deemed acceptable.
But what happens when nature does not play ball?
Whilst food is the most essential element we need to survive and hugely energy (and water) intensive to produce… often it goes to waste. Ploughed back into field, left to rot, fed to animals. All because it doesn’t tick a box somewhere.

Read further: Beauty standards for food? We have a problem with wonkiness…

When we look at those who walk on the street we can find many more people who start looking like a lot of people from over the Atlantic Ocean.

Every October 24, thousands of events all around the United States of America bring Americans together to celebrate and enjoy real food and to push for improved food policies. On that day they have a ‘Food Day‘ which has to inspire Americans to change their diets and their food policies. Nutritionists generally recommend eating a wide variety of foods; however, some groups of people survive on a very limited diet whilst others think they need to eat as much as possible of all sorts of stuff.  The theme for 2016 was “Toward a Greener Diet.”

That Greener diet is something what lots of Europeans should be looking too and why they were afraid for the American trade agreements. But having heard the bad news Donald Trump becoming the president, Europeans will have less fear they have to come to accepting the genetically manipulated products and seeing TTIP not going through.

But back to the four legged friends. Today we want to present Bailey who is a basset who likes sustainability and his boss Hannah who is a writer who likes bassets.

Like for human beings we can see that their four-legged friends often also could use some specific allowance or selection of food, esp prescribed to control weight or in disorders in which certain foods are contraindicated.

As a dog, that basset may not have a whole lot of food options

–it’s dry, brown meat-flavored bits day in and day out (with the occasional apple slice or piece of dropped chicken thrown in there). {Jump on the Local-motive!}

My Shetland Collie (Fritz) also to be happy with his dry brown crackly little bits of three different brands (two per day, at night always the same brand) and around the end of year some extra special health food to calm him down for the fireworks

Sometimes we can see the look in our dogs face

Why not for me?

He looking jealous for us, human beings, having an endless choice of nice looking dishes and great smelling products.

We ourselves do keep to as much as possible natural products and not much meat or fish. Our dog receiving more meat, dried lamb and dried chicken with his dried vegetables, every day, and when, in the season, we eat some wild meat (wild boar, roe deer, deer and pheasant) he is happy to receive some ‘real’ pieces of cooked meat (a big treat).

Like we try to limit the ecological footprint Bailey’s boss is also aware of the urgent need to look at where we get our food from.

There are about 1,000 reasons to choose local food when you can (that’s 7,000 in dog reasons), but I’ve got some napping to do in this lovely autumn sunlight, so I’ll give just a few of them here. {Jump on the Local-motive!}

I wonder how Baily was settling in to watch the outcome of this presidential election which could some of the European tummies turn around. Though on their site it was noted

Something to ponder–why is it so many candidates don’t list their views on the environment? Is it that they don’t care? Is it that it’s not important enough to voters for them to feel the need to do it? {America! – Great debate} (I love the picture of the dog with the Gaelic ale by her article)

Baily who likes sustainability also loves apple slices, like my dog, and sleeping on the couch. But mostly he wants to talk to you about sustainability. So perhaps it is not bad those from far away would also give him an ear and listen how he’s going to tell all about different sustainability projects happening in his town – greenways, community gardens, eco-houses, all kinds of great stuff.

And with every post I’ll share an easy sustainability tip that you can do right away. {I’m Bailey…}

Carnivore Bailey who can hardly preach vegetarianism, but wants to shed a light on his and the humans their way of eating and handling nature

Being a very health-conscious basset he is well aware of the average American diet which is contributing to obesity, diabetes, heart disease, and other health problems – problems that land them in the hospital and cost Americans more than $150 billion per year.

Now having a man coming to steer the nation, who himself is not one of the leanest, but wants to have the American products on the first line, he and we can wonder how he is going to tackle all the pollution, the emission of the US companies he want to stimulate their production.

a meat-heavy diet takes a terrible toll on the environment. 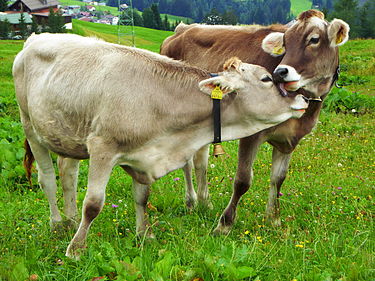 Cattle on a pasture in Germany

about before, large-scale agriculture has a huge carbon footprint, and livestock farming is particularly hard on the environment. Four-fifths of the deforestation across the Amazon rainforest (where some of my more exotic cousins like the capybara and the golden lion tamarin live) could be linked to cattle ranching. Factory farms where pigs and other livestock are kept in very tight quarters can produce as much sewage waste as a small city (that’s a lot of poop!). On those farms they use lots of antibiotics to keep the animals healthy, but using those antibiotics creates antibiotic-resistant strains of bacteria – bad news for humans and bassets.{Happy Food Day!} More than half of the Shetland catch by weight and value is Mackerel. Shetland Islands Council (2010) pp. 16-17 (Photo credit: Wikipedia)

For the better or the worse, the Americans and the rest of the whole world shall have to face a new president of the United States of America, who made his money by not being conscious about the environment and not willing to have an eye for the welfare of humans let withstand animals, so curious how Bailey and other animals in that world which made their choice these last few hours, shall look at the next coming four years, though at his first speech after it was known he would be the next president he mentioned

whilst others in the past spoke about

Find Baily and his boss her voice at: SustainaBailey

On the Flemish television we could see in a few documentaries where also hidden camera’s were used, how In some countries such as Belgium and France, there are supermarkets that ensure that is not to “dumpster diving” can be done in their trash-bins. Scandalously they make sure that nobody shall be able to retrieve something from their dustbins.

Away with it oh no! (English version)

Day 1038.. there you throw away another meal again. The leftovers, which are superfluous because it was to much. I hear it a lot around me and sometime in the news they come with a new message about dumpster diving people who go looking for edible food in the garbage. Last year I talked on my blog about the recycling of food. Here I mentioned Damn Food waste. This is a day in Amsterdam where they make dinners from waste. The waste of food is enormous. Luckily, there are new initiatives for the proper handling of food.

Last Sunday I was watching 24 kitchen, there was a program about recycling food forward. I immediately got inspired and went to look for some interesting developments in the field of food recycling.

Last year, in besides the Damn Food waste festival also Restival was organized…