How can it be that the one who protested so much against faith in God would have loved to be receiving a funeral service in a church. The one everybody considered an atheist, brilliant and groundbreaking British theoretical physicist, cosmologist, and author, who died on Wednesday, March 14 at age 76, got a ‘Christian funeral’.

“Stephen Hawking now knows the truth about how the universe was actually made. My condolences to his family.”

Was it now his family who tried to save ‘his soul’ and therefore wanted a church service?

The galaxy’s most unlikely celebrity, a brilliant mind trapped in a failing body, a global inspiration to disabled people, and so much more, found like every human being that life has an end. For him it came later than expected. He had a a relentless drive and unquenchable zest for life that has allowed him to achieve so much despite his huge physical challenges. As his daughter Lucy would often say, he was “enormously stubborn”.

Diagnosed with motor neurone disease in 1963 at the age of 21, he was told he’d have only two more years to live. Yet his mind managed to travel light years in the wake of that devastating diagnosis, to help turn cosmology from a fringe subject into perhaps the most compelling of all the sciences, in which he provided profound insights into gravity, space and time few have delivered since Einstein.

Through mutual college friends at a party the year before his devastating diagnosis he met Jane Wilde, a languages student, who he married in 1965. In 1974, aged only 32, he was elected to the Royal Society, the world’s oldest scientific academy. A few days after the birth of his daughter Lucy, in 1970, he had a “Eureka moment” leading up to his realisation that black holes are not so black. He discovered they would bleed off what is now called “Hawking radiation” and gradually evaporate, “to my great surprise”.
By the end of the 1970s, Hawkings had advanced to hold the Lucasian professorship of mathematics at Cambridge, once held by Newton.

In 2012 he reached perhaps his largest audience – at the opening ceremony of the London Paralympics. The following year he became $3m richer as one of the first winners of the Breakthrough prize to recognise theoretical work, in his case the discovery of Hawking Radiation from black holes – which would have earned him a Nobel prize if experimentally confirmed in his lifetime – and his deep contributions to quantum gravity and quantum aspects of the early universe.

The one who was supposed not to live longer than his 20ies got 76. though he was known as an atheist, he got a funeral service in Cambridge. Shortly after 2pm Hawking’s coffin was carried aloft into the church of St Mary the Great, a stone’s throw from Gonville and Caius college where he had been a fellow for more than half a century.

As befits a man who seemed as comfortable with celebrity as he was with the cerebral, Hawking’s funeral drew a starry crowd. The actors Eddie Redmayne – who played Hawking in The Theory of Everything, a film about his life – and Simon Russell Beale, a former student of Gonville and Caius, were in attendance. So, too, were the model Lily Cole and Queen guitarist Brian May.

Can it be that so many understood him wrong by believing he did not believe in God? When he was an atheist, were his children and his wife that too? But then why this charade in a church?

Hawkings argued that God did not create the Universe.

It does not really matter. In my mind, heaven cannot wait for him. Seventy-Six is a long time that God gave him and there is plenty of room for him in heaven, I can imagine that he will have a grand time conversing with Isaac Newton and Albert Einstein, both had faith and believer (sic) in God. 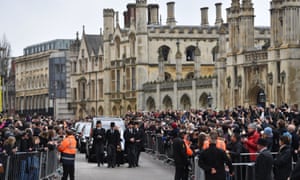 Crowds gathered as the funeral procession passed through the streets of Cambridge. Photograph: Joe Giddens/PA

The Shameful Mocking of Stephen Hawking