Religious celebrations in May 2016 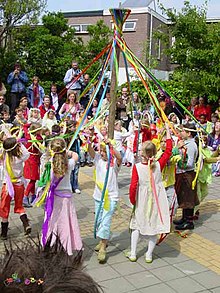 In the 60s of last century, the fertility rite with the maypole tradition was popular, but half a century later it became very quiet around this tradition. May 1 has been overcome by the party of the socialist movement. On that first day of the month of Spring everywhere you can find the call for social movement in which the ordinary man, the worker is put in the spotlight. After Labor Day, celebrated by the atheists, socialists and communists as well as many workers, the Catholic community can not fail to show that it cares about the working man. In 2008, May 1 was falling in the same weekend of Ascension so that when all the workers movements gathered together on the same day.

May 1 is also the day when the Catholic community commemorates the publication of the in 1946 published Deiparae Virginis Mariae Encyclical of Pope Pius XII, the Assumption of Mary and given the general start of the month of Mary, also initiating the annual pilgrimage to Lourdes.

On the evening of the “national memorial” for all the victims killed by war, the day before the “Liberation Day” on May 5, one thinks in Belgium on the eve of Rerum Novarum how the Belgian government tries to bring in cuts on spending by  taxing the ordinary man but leaving those with lots of money and the multinationals untouched.

The feast of Rerum Novarum (literally ‘about new things, or “acting on the Condition of Labor”) is named after a key text in the history of Catholic social thought, established by Pope Leo XIII, in which the position of the church on issues relating to the proper relationship between capital and labor is established. Traditionally the Christian labor movement gathers on the eve of Ascension Day to commemorate Rerum Novarum and send out a powerful symbol of the Catholic tradition of social concern.

The vision set by the encyclical emphasizes the rights and obligations that bind together the owners of capital and workers. Throughout the encyclical, Pope Leo XIII articulates the inherent dignity of labor and worker issues that were taken up by successive popes in later encyclicals, especially Pacem in Terris and Centesimus Annus. Even rejects Rerum Novarum both radical socialism and unbridled capitalism, offered a vigorous defense of both private property and the right of workers to unions, among other forms. The document published on May 15, 1891 is considered the first modern social canon of the Church, because it meant a renewed understanding of the need for the Church to offer its critical reflection on the social issues of the day.

Last night Beweging.net in response to Rerum Novarum asked for a

“fair contribution from everyone, from Panama to De Panne“,

in the speech by Chairman Patrick Develtere. According to him, all social groups are being targeted, except the wealthy.

“Today all groups in society seem endorsed, in a rotation. One group some more than others. There is only one group that seems to get away with it, not feeling the pinch -.. And those are the wealthy”

The major problem in Belgium is that we are stuck with a very greedy government, that constantly has increased taxes on incomes and managed to acquire more and more taxes to purchase goods. In Belgium we find people with multiple homes who are almost not taxed while these without dwelling are very highly taxed. That income taxes are very high and low on power, denounced the president of the former ACW. He sees no reason to tax from rental or capital earned one euro less than one euro salary.

While the Christian labour movement has called, more than once, for a tax on capital, warned ACV chairman Marc Leemans also for new cuts.

Of the many processions the Procession of the Holy Blood (Heilig Bloedprocessie) in Brugge (Bruges) is the largest religious catholic procession for that day and dates back to the Middle Ages. It emerged as a civic ceremony by the late thirteenth century and has as centrepiece the Relic with the Precious Blood of Jesus, a cloth with coagulated blood of Christ Jesus, brought to the city by Thierry of Alsace after the 12th century Second Crusade. This year 60 000 visitors saw more than 2000 participants in a style dating back to Bruges’ golden age (15th century), when Bruges was one of the most important harbours north of the Alps, and also a bustling commercial market and residence of the Burgundian dukes.

Normally one sees in May many groups plan their annual meetings. According to the fall of 14 Nisan there are Jews and true Christians who gather to celebrate the liberation from Egypt and keep a reading marathon around the spoken words of God and the provision of a solution against human slavery. (This year 14 Nisan was on April 22, but as usual the three days around the Catholic Pentecost are also used to hold a three-day conference and to achieve such talks because people should not have to go to work.)

Last year the Catholic Church intended already to give more time to  young children and families to get to know what to believe means and to give them more Catechetical preparation as a process, a specific process that one goes through and that gets everyone involved: parents, siblings, and the whole community. In the expectation that believers would get more familiar with who Jesus is and what it can mean for their faith life.

This takes time and can not be handled in a few months.

In 2015, they tried with a two-year preparatory catechesis, with confirmation and first communion to coincide and to be celebrated around the age of ten years, to implement the third or fourth grade. But this did not go down well with the majority of Belgians who actually do not have much faith but want to celebrate a first and solemn communion tradition. Three years older than what might be common for a first communion might still go, but two years younger than hitherto the case for the solemn or second communion with then at the age of eighteen again a confirmation (Chrismation) seems to them too late and unnecessary for that ” forming “while the performance at ten is too young to be a rite of passage from innocent child to a child that should have enough understanding, a good sense of good and evil, and should provide an introduction to adult life.

A 1949 group photo of children at their first communion

Today, May 5 is for Catholics Ascension, which traditionally, is also a communionday. Supposedly Catholic families want their children between 6 and 8 years celebrating their First Communion, and have them accepted by the community as a full member of the Catholic Church. A large proportion of young people between 11 and 16 years repeat their choice for the Catholic faith in a solemn communion. Usually they do it together with the confirmation.

Just as Baptism and First Communion Confirmation is a sacrament. But the number of young people to be confirmed is dropping spectacularly, by 30 percent in ten years. The decline is greatest in the diocese of Antwerp, and the smallest in the dioceses of Bruges and Hasselt.

Until the early 20th century children went for the first time to communion after their confirmation. But for the children of practising parents it was was sad to have to wait so long. Therefore, the First Communion has moved forward. And therefore the solemn communion arised: as a rite by which admission to the church, established previously in infant baptism, is said to be confirmed (or strengthened and established in faith).

“The confirmation is a rite of passage. People ask for it. Just like baptismtraditionally belongs to the birth of a child. Now still 60 percent of parents have their children baptized with us. It is a natural historic development that the Catholic Church rituals are organized here. There is little else on offer. “

But it is the tradition that it has on the faith and the people are not so much interested in another, or any belief in a god. But they want to allow the children a party with gifts, to make their children feel they belong there and are part of the same community. “To belong to the community” is the main argument.

Van den Bossche continues to hope that in the longer term the Brussels example will be followed anyway.

The 5th of may, when it is no Ascension day is taken as prayer day.

The day before Ascension (the feast of the Ascension of Jesus) “a balloon with lots of wind” said the Catholic Education Board wanted to give Muslims and other faiths a prominent place in schools with provision of their own places of worship. As we could hear and read about the plans it looked like the Catholic Comprehensive School will actually create something that already “exist in the system and where community education should stand for. That then means that it makes itself superfluous throughout the education system if the state already attained a general education for all species in our society.

That the Guimardstraat (Guimardstreet) knocked off one’s feet, through Director General Lieven Boeve the day before Ascension Day presented one of the foundations of his project – and thus by extension of the Flemish community – for Bart De Wever has been a mistake proposal and proof that Catholic education has ruled itself out by showing

“That a distinctive educational project for them is not needed.”

Open VLD also can not agree with the proposal of the Guimardstreet. Education Specialist Ann Brusseel says,

“It makes good use of the Muslim community to counteract the secularization of society”.

Vlaams Belang Chris Janssens points out the threat of the high influx of refugees and the determination of the growth of the Islamic faith. He says

“The plans are, given the rapid increase in the proportion of Muslim pupils in our education, de facto comes down on a voluntary Islamisation.”

One month before the start of Ramadan (June 6) and two months before the Sugar Festival (July 6) Islamic smoke has come above the Catholic celebrations this year and there is embezzlement by the current poor economic situation. When one walks around in the municipalities it is seen that the tents of previous years have adopted smaller forms and the decorations for the ceremony of the communicants declined dramatically.

On Sunday, May 15th, many Christians will celebrate the outpouring of the Holy Spirit, Pentecost 10 days after Ascension Day is “50 days” and seven Sundays after Easter, but looking at it today the spirit is out of the bottle.

The visitation by Jacopo Pontormo (ca. 1528)

The festive season will conclude on May 31 with the celebration of Mary‘s visit to her cousin (Elizabeth) Elisabeth, which is described in the Gospel of Luke (1, 39-56). This Feast of visitation of Mary or Mary Visitation, remembers at the time of the visit, Mary is pregnant with Jesus and Elisabeth of John the Baptist. Elisabeth sees Mary, when the child jumps on her lap filled with the Holy Spirit, she says to Mary:

“The most blessed of all women are you, and blessed is the fruit of your womb!”

Mary responds with a hymn of praise to God, the Magnificat. Elisabeth’s words are contained in the Hail Mary, a prayer loved by Catholics.