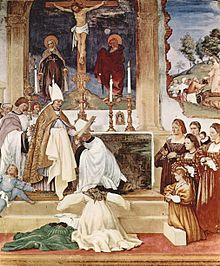 A Catholic bishop granting plenary indulgences for the public during times of calamity. Note the almsgiving in the background. Wall Fresco by Italian Artist Lorenzo Lotto, Suardi, Italy, circa 1524.

The Roman Catholic Pope in the 1200s was annoyed that there where people who called themselves Christians but did not want to worship Jesus as their god. Those true Christians said there was only One God, Who is one, and which was not the god of the Catholic Church but the God of Israel. This was a blow in the face of the Roman Catholic Church which also could see a lot of money not coming in their hands because those Christians who refused to worship the Trinity also said that people paid for their sins by their death and not by ecclesiastical indulgences.

The Pope not pleased with those lay preachers who could undermine his establishment got enough clergy interested to battle those who had other thoughts than they. He established the “Holy Inquisition Against Depraved Heresy” to deal with breakaway ‘Christian sects’. At first it was a judicial procedure set to be able to judge all sorts of people who did not want to go with the Roman Catholic Church. But later an institution was established by the papacy and, sometimes, by secular governments to combat heresy and to act like we now see Al Qaeda, ISIS/ISIL or Daesh, Boko Haram and other fundamentalist Islamic groups to press what they believe would be the only true faith everybody had to have.

First being relatively powerless, as secular rulers, suspicious of Papal meddling in their own internal affairs, did not allow it access to their countries, in a period of more than 200 years, very few heretics were burned at the stake. In 1481, at the peak of the Ottoman power, however, after extracting a promise from the Pope that the Inquisition would remain under the Crown’s control, thus ensuring that confiscated assets of heretics would revert to the throne, Ferdinand and Isabella established the Inquisition in Seville (Reconquista). While it is commonly assumed that the Inquisition was brought to Spain out of a concern that Jews were trying to influence conversos to leave the Christian fold, one prominent historian is of the opinion that by 1481 Jewish consciousness was virtually nonexistent among the conversos, and that Jews did not attempt any such outreach. Rather, he believes, the Inquisition was an outgrowth of the attitudes of Spain’s Old Christian population. In the words of one Spanish historian,

“The Inquisition was a genuine expression of the soul of the Spanish people.”

When we hear about the Inquisition we most often do not think of the Jews, with good reason, because most damage was done to sincere godly people who had taken Jesus as the son of God and their saviour and not as their god. Though the horrible action taken by the Roman Catholics, undertaken in the twelfth century and following centuries to find “Christian heretics” who would be punished or killed, had her eyes also set on the Jewish community. Eventually, Jews too were open to such charges of heresy, simply for being Jewish; and torture was routinely used to extract “confessions.”

These coming weeks we also remember how this coming up time to Pesach was a very dangerous time for Jews, because they could be caught cleaning their houses and linen and buying vegetables before Pesach, blessing children without making the sign of the cross, fasting on Yom Kippur, and refraining from work on the Sabbath.

Interestingly enough, Jews who never converted to Christianity were not under the jurisdiction of the Inquisition, and could practice their religion freely and openly. It was only conversos who were considered heretics for forsaking the Christian creed and practising Judaism. Worse for the Catholic Church was that some of those converts did not become a Catholic but accepted rabbi Jeshua as the Messiah, the son of God but not a god son, like the Roman Catholics did. Those having gone in the water to become a Baptist, became with that group a target for prosecution, according to the Roman Catholics being a dangerous ‘cult’ and with other protestants to be removed from this earth. 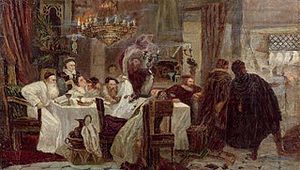 Marranos: Secret Seder in Spain during the times of inquisition, an 1892 painting by Moshe Maimon

Mainly because of persecution, Muslims and Jews in Spain at that time found it socially, politically, and economically expedient to convert to Catholicism, but where not really practising that faith and at home kept their ow practice of faith. In 1481 the Inquisition began to function in Spain to expose the secret Jews, known as the Anusim (who were forced to abandon Judaism against their will) or Marranos, who converted to the Christian faith to escape persecution but who continued to practice Judaism secretly, but over the years spread to many countries. The Spanish Inquisition was anti-Jewish more than in any previous countries. The first public sentencing and burning alive of six marrano men and one woman by the Spanish Inquisition was held on this date in Sevilla in Southern Spain.

All sorts of torture where good for the unsparing cruel fanatics, of which many also set their eyes on the Jews and certain Christian groups or monasteries their assets.

Differently with the present day inquisition groups of Islam the Roman Catholic Church did not want to spill blood, but only “save souls”. For not having their clergy to become accused for having blood on their hands they made use of civilians and secular authorities for the many executions, whereby they found it was best to use bloodless deaths, such as strangling and burning alive.

For ISIS the colour today is orange, but at that time the condemned people wore yellow sanbenitos, cloaks, with red crosses and the letter X painted on them. Those given the death penalty wore tunics with paintings of flames and devils. The procession marched through the town to the burning area where the judges sat. The cases involving lesser penalties were judged first, then those receiving strangulation before burning, and finally those condemned to be burned alive.

“being influenced by the Devil, after which she laid eggs with prophecies written on them.” 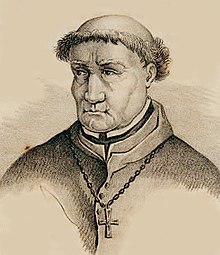 Tomás de Torquemada (Thomas of Torquemada) Castilian Dominican friar, and the first Grand Inquisitor in Spain’s movement to homogenize religious practices with those of the Catholic Church in the late 15th century, otherwise known as “The Spanish Inquisition.” (Wikipedia)

In 1483, Queen Isabella’s personal confessor, the Dominican priest Tomas de Torquemada, was appointed head of the Inquisition. Of converso origin, Torquemada was a fanatic Jew-hater who was wholly incorruptible. He was convinced that only the total expulsion of the Jews from Spain could end Jewish influence in the national life.

Torquemada did not cut the grass from under the Jews’ feet and quickly began taking steps to weaken the unconverted Jewish community and eventually expel it from Spain. In 1485, he forced all rabbis, under pain of death, to report conversos who were practising Judaism, and to pronounce a rabbinic curse on any Jew who failed to notify the Inquisition of such behaviour. This cruel edict badly split the Jews of Spain. Alarmed by the greatly increasing power of the Inquisition, that year a group of conversos plotted to kill the inquisitor of Saragossa, Pedro de Arbues, hoping to begin a popular uprising against the Inquisition. However, the assassination had the opposite effect. The townspeople were enraged, rampaging through the streets, killing many conversos. All the conspirators were caught and executed, and the Inquisition grew even stronger.

Purity of faith became the national policy of the Catholic sovereigns, and thus came about the final tragedy, the edict of expulsion of all the Jews from Spain on March 31, 1492. Portugal promulgated an edict of expulsion in 1497 and Navarre in 1498. It was under de Torquemada his guidance that the Inquisition became such a terrifying institution, amassing enormous assets confiscated from its victims, much of it used to finance the war to conquer the last Muslim stronghold of Granada.

In 1680, the most spectacular of all autos-de-fe was held to celebrate the wedding of King Carlos and his bride. At that time, the Inquisition spread to Spanish and Portuguese colonies in the New and Old Worlds, with victims burned in Havana, Cuba; Mexico City, Mexico; Buenos Aires, Argentina; and Goa, India. After 350 years, the Inquisition was finally abolished in 1834, the year the Liberal Wars ended in Portugal and pro-republic uprising fails in Piedmont. In all, more than 400,000 people were accused of heresy, with 30,000 of those put to death.

The Spanish Inquisition by Yosef Eisen