Capitalism and The environmental record of the communist world

Continuation of Capitalism and relevance to climate change

When looking at the pollution in communist countries questions can be posed if those communist regimes were somehow unable to regulate the use of their common resources.

Nice to notice that Gezwin Stanley finds it more reasonable to posit that the communist failures were also failures of capitalism, specifically “state capitalism”, the economic system in which the state undertakes business and commercial (i.e. for-profit) economic activity and where the means of production are nationalized as state-owned enterprises (including the processes of capital accumulation, centralised management and wage labour). He writes:

The environmental record of the communist world, once it finally started to be revealed with the fall of the Warsaw Pact and the at least partial “opening up” of China to Western business interests, was, at times, disastrous. The proposition is essentially that ownership makes owners take more care of the environment, and that the communist record is one huge tragedy of the commons (for example, see: “Marxism and the Failure of Environmental Protection in Eastern Europe and the U.S.S.R.”). {Why capitalism massively intensified the climate crisis, and why only collective action can solve it}

Though in the idea of communism is included the ownership of everybody of everything. Everything is namely part of that what we are allowed to use or to be confronted with. We do not own the world, but we may use the world, as having it in loan. As such in communism is expected that everybody shows respect for the goods of others and for the nature where we are allowed to live in.

We agree that in the communist system we have seen it evolve in the wrong way, in the Soviet Union going to dictatorships as Stalinism and Leninism, which have not much to do with real communism, as well with the hypercapitalism we can see now in the Republic of China.

The communist world’s track record on the environment really is rather catastrophic. The most infamous examples include the Chernobyl disaster in 1986, the shrinking of the Aral Sea and the irradiation of northern Kazakstan by the Semipalatinsk (present-day Semey) nuclear testing site. The Soviet record in terms of air and water pollution is also very poor. Shortly after the fall of the Soviet Union, in the early 1990s, Russia’s Hydrometeorological Service, which monitors air quality, reported that 231 out of 292 cities exceeded maximum permissible concentrations (MPCs) for particulate matter, sulphur dioxide, nitrogen oxides, or carbon monoxide, with eighty-six cities exceeding MPCs by a factor of ten. At around the same time 75 percent of Russia’s surface water was polluted, 50 percent of all water was not potable according to quality standards established in 1992, and an estimated 30 percent of groundwater available for use was highly polluted (http://countrystudies.us/russia/25.htm). {Why capitalism massively intensified the climate crisis, and why only collective action can solve it}

Gezwin Stanley looks at (a) communism where there is an economic system where the things that people need to live and make a living are controlled by the few. For him it doesn’t have to mean “free” markets as many capitalists aim for and sometimes achieve oligopoly or monopoly.

Also, though “control” normally means “legal ownership” that doesn’t necessarily have to be the case: there are situations where very effective control of the things that people need to live and make a living is possible without formal legal ownership, from a company where directors are able to laud it over shareholders to the situation we are about to explore: state capitalism in the Soviet Union.

One very clear reason why we should take the concept of “state capitalism” in Marxist-Leninist regimes seriously is that it is not an invented phrase imposed on such regimes after the fact. It was, in fact, a phrase use by Lenin himself in 1918, not to describe a state of affairs that should be avoided, but as a stage in a plan to modernise Russia as part of its road towards socialism. Basically the idea was that, to transition to a system where the workers would take over the means of production, large-scale, centralised industries had to be created first, under state control, but using the techniques and expertise of capitalists.

The main aim of “state capitalism” was therefore to build, in relatively backward and agrarian Russia, the very capitalist enterprises that the workers could later control as part of socialism. From the very inception of Soviet “state capitalism” though there was a secondary aim: to modernise the economy of Russia so that it could better defend itself militarily against foreign hostility. In 1918 Russia had just lost a war to a much more industrially advanced Germany. This was a further driver influencing the nature of state capitalism in the Soviet Bloc that would persist for the duration of the Soviet Union. {Why capitalism massively intensified the climate crisis, and why only collective action can solve it}

“What is state capitalism under Soviet power? To achieve state capitalism at the present time means putting into effect the accounting and control that the capitalist classes carried out. We see a sample of state capitalism in Germany. We know that Germany has proved superior to us. But if you reflect even slightly on what it would mean if the foundations of such state capitalism were established in Russia, Soviet Russia, everyone who is not out of his senses and has not stuffed his head with fragments of book learning, would have to say that state capitalism would be our salvation.

I said that state capitalism would be our salvation; if we had it in Russia, the transition to full socialism would be easy, would be within our grasp, because state capitalism is something centralised, calculated, controlled and socialised, and that is exactly what we lack: we are threatened by the element of petty-bourgeois slovenliness, which more than anything else has been developed by the whole history of Russia and her economy, and which prevents us from taking the very step on which the success of socialism depends.” (Session of the All-Russia C.E.C. April 29 1918: https://www.marxists.org/archive/lenin/works/1918/apr/29.htm)

The greatest problem is man’s love for power and control and often when people come to power they start enjoying their status and often want more. Often those who got in power want to stay in power and do not want to share their power with others.  The article writer notices this also and writes

once a state capitalist system under the control of Communist Party apparatchiks was created, any transition to actual socialism was stalled indefinitely. 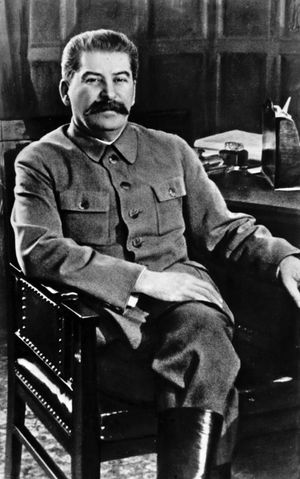 Joseph Stalin, secretary-general of the Communist Party of the Soviet Union (1922–53) and premier of the Soviet state (1941–53), misusing his power eliminating everybody whowas in his way or did not agree with his ruling (and dictatorship).

“State capitalism” had severe effects on how the Soviet system would deal with environmental concerns. As with western style capitalism this was partly because those in control had much more to gain by, say, maximising production, than they had to lose through environmental degradation. It was those at the top, higher up the party structure, who by driving up their production figures, could gain promotion or at least, at times, and especially during Stalin’s rule, avoid being purged. Also, as ever, it was those at the bottom who were generally least able to escape the effects of environmental degradation, as in the “exemplar” Soviet steel producing city of Magnitogorsk, where party officials enjoyed a comparatively luxurious life in the wooded “American town” that was originally built for specialists from the United States in 1930, while many workers lived in barracks where filthy conditions and a lack of clean water contributed to the spread of deadly disease ( see “The secret history of Magnitogorsk, Russia’s steel city”). {Why capitalism massively intensified the climate crisis, and why only collective action can solve it}

The whole command and control system of the Soviet Union felt compelled to drive for economic growth at almost any cost, and did not mind losing lives for it. It became so bad that there was an obsession with economic growth and with high status on all levels, but in particular in sports and arts, like ballet. Any opposition to the ideas of those in power had to be killed by the root, as that could endanger targets.

The “Plan” and the careers, or at times lives, of individual apparatchiks. Similar to how in the West the climate crisis was first concealed with well-funded and orchestrated denial and then greenwash, in the Soviet Union the true state of the environment was kept hidden by deeming environmental statistics to be state secrets. {Why capitalism massively intensified the climate crisis, and why only collective action can solve it}

Next: State capitalism and climate emergency