Heaving had too much rain

“A Drop Of Rain” shall not harm, but the last few weeks here in Belgium we had enough water and could witness some very major cloudbursts that caused huge water and mudflows. In 262 villages the damage was horrible. In Wallonia the clean-up shall take several weeks but now mountains of rubbish start already towering above the horizon. 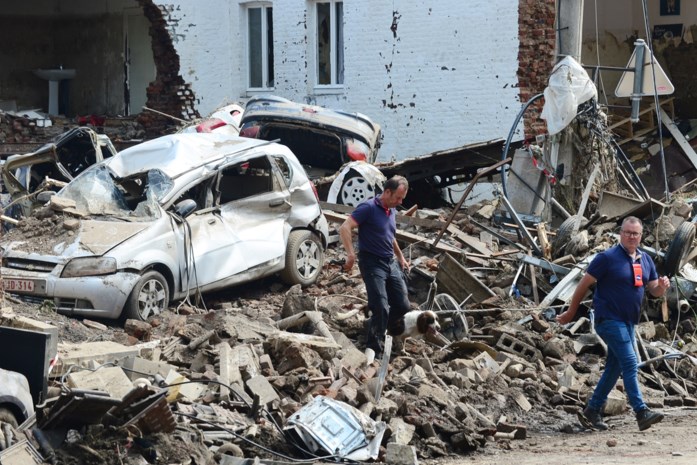 This year in several countries there is no reason at all to sing and dance in the rain.

Everyone will understand that the assistance and crisis management for one of the largest floods ever experienced in our country was and is a feat. Days (weeks) people did not get to see much help from the government, but luckily lots of citizens of this country showed to the government that this is not such a split country as many politicians want many to believe. While there appears to be a total lack of coordination, ordinary citizens have plucked up the courage to go miles away to offer help to the residents in the affected areas.

Many flood victims literally have nothing left. Only what they have on. Soon civic initiatives were launched. In several villages all over the country, there were collected warm blankets, sheets, non-perishable food, etc..

Dirt left behind by water in the July 2021 flood

In the face of this huge water disaster that has swept over Wallonia and West Germany, we have noticed a wave of great solidarity. The terrible thing also shows something very beautiful, namely the solidarity of ordinary people with their fellow man, while politicians sit around bickering and talking about setting up committees instead of rolling up their sleeves.

When there is a setback– a death, an accident, loss of job, or something of that sort – there is nothing funny. It doesn’t sound good to laugh at any of this. What looks appropriate in this condition is crying, cursing, expressing grief or all these expressions. {Finding Humour In Tragedy}

Belgium and West Germany are hit by an enormous disaster. Lots of families have lost close relatives and have seen their house and/or business seen destroyed by the strong mass of water which seemed to have had an unknown power.

It is difficult for anyone to move on without these expressions. The time taken for moving on depends on person to person and the degree of loss. Like everyone knows the bigger the loss, the more time it will take to heal. {Finding Humour In Tragedy}

But in the small details and by the many people who have come to help, several victims of this natural disaster were able to find some light in the dusk and occasionally got a smile on their face of satisfaction, that ordinary people had not abandoned them after all, as father state seemed to have done, or rather seems to be incapable of intervening with any real help.

Receiving some smile at several moments in the day of hard work getting rid of all the filthy gunk, makes saving the day. More often, crying is more near than laughing. But in these circumstances, we can see that laughing at a problem gives power and a sense of control over it. Otherwise, depression sets in and worsens the situation.

After the July flooding in Pépinster solidarity to clean-up, August 2021

Who would not be displeased and depressed to see a life’s work wiped off the map in a few minutes?

Much too often we hear voices expressing their thankfulness for those citizens from all over the country who came to help, though they also feel abandoned by the governement.

“Everything, everything, we had to do here ourselves. Where was the army? The police? Once we saw them. Then they came to save people. But they had already been rescued by family, by friends, by random people who came from everywhere. It’s fantastic, but it shouldn’t have been like this. There are also people whose job it is to help us,”

Wherever you go to ask in the villages where the Ourthe and the Vesdre suddenly seemed like the Amazon last week, so big, people speak highly of the volunteers. They were there as soon as they could be. They understood what was needed. They cooked, mopped, dragged, comforted. Some were young, others old. Sometimes they hardly spoke French, but Arabic, Dutch or Flemish. Everyone speaks of strangers who suddenly turned up with buckets and sponges, who cleaned whole houses from top to bottom and moved on without waiting for a ‘thank you’.

This is something “magical” and worth remembering how such a disaster brought so many people close to each other. The difficulty to cope with this situation was soothed by the helping hands. For years those traumatised people shall have to try to rebuild their life.

Not dealing with emotions or any kind of disaster will not get anyone out of that trauma. Instead, depression, anxiety and many more problems will arise in no time. {Finding Humour In Tragedy}

The coming days and months it shall be up to insurance companies and to the governments of the affected states or Länder, to do the restoration and healing work.

Wallonia is licking its wounds. Now that the water has receded everywhere, the devastation becomes clear and the living conditions for thousands of people have become very precarious.
After the drama of the floods, a second small disaster may now occur. It appears that many people are not insured, and will therefore not be able to claim financial support from the Walloon Disaster Fund. This appears to be the case in Verviers.

A dangerous turning point – Earth facing the collapse of everything

Europe’s catastrophic flooding was forecast well in advance – what went so wrong?

One response to “Heaving had too much rain”