The North and West of Belgium may look like a country full of bricks, full of houses with here and there some green trying to stay straight and alive. Where there can be found trees and fields the landscape is changing to red, yellow and golden colours. In the little gardens we may have mushrooms are the living proof we are in fall.

From the Schmidlin Family Farm we hear that at their place, in the Pacific Coast Range of Northern Oregon,

Fall seemed to only last a week this year in the Pacific Northwest.

the vibrant hues of the trees as the leaves turned from greens to wild splashes of color was only in full display a short while. 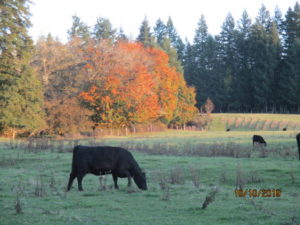 Storms that came in from the ocean sent wind and rain driving sideways at times. They lashed at the vegetation and ripped the tender stems of the leaves right off the trees that are drifting into slumber in preparation for the cold ahead. {From Vivid To Bare}

For the moment in Belgium we did not receive our portion of Autumn storms, but the temperature indicators do not seem to know where to go, one day cold the other day warm (? 17° C) for the time of year.

This year in Flemish Brabant the trees started already becoming brown in July (because of the water shortage for two years already), though in the South of France in September we could find lovely green colours and later in October them starting to give way to red, yellow and gold. They want to show the world they are strong and not yet willing to give away the crown they may be in the sky. Whilst mother earth cries unto them they sing their song in the wind, calling for memories and tricking us into lovely walks in nature.

At some places in Europe the birches are master of the surroundings. At the Muir of Dinnet National Nature Reserve it won’t be long until they lose their leaves, so the  park strongly advise to get out there now – or we’ll miss the best autumn colours!

Loch Kinord has been looking especially pretty with the yellow birches. There’s just something about reflections on water that makes things extra-beautiful. {Golden Autumn Days – Muir of Dinnet NNR}

How long did we looked forward to sunny and warm days, and how quickly they are gone. Though at for some years, at certain times in Belgium it looked like we only had two seasons, a wet one and a wetter (and colder) season. With global warming we are treated with more extremes, hotter days but also more heavy winds and rainstorms. Some parts in West Europe receive in a few hours the amount of water which would normally fall there in three months. Without any concession, the water takes everything it can grab and drags it along into the depths or miles further to throw it on one large scrap heap. Cleaning up is all what rests for those who could survive the sudden torrent. 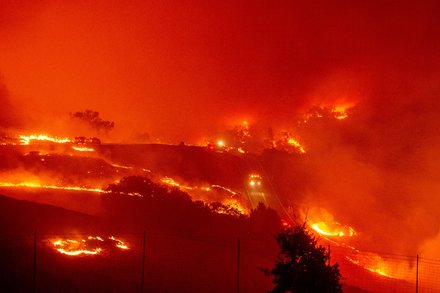 Is it not water then there are the flames which love to lick the earth and get tourists flee their resorts of rest. That way the flames get those fleeing people thinking about the drought and how they too are responsible for what is going on with nature which seems to have lost its wheel.

Is it the slow speed by which this year wants to announce the coming Winter, that I may be feeling a little bit down? Or is it my awareness that mankind has not treated his surroundings very well? Is it me feeling like man has lost his connection with mother earth or not willing to take care of it any more?

Though Fall brings us such magnificent colours and when we look at the many blogs and at Instagram, we are treated with an incredible world of magic. But that magical colourful world is something which seems to be far away from the industrialised economical world of West Europe. Most people not receiving enough time to go to the parks and to enjoy the changing nature.

The trees call out and reach to the people down there. But they do not seem to hear or seem not wanting to see. Even when youngsters already for months call those in charge of governments to become aware that we should turn our way of life and have to make serious measure to protect our earth.

Let those voices on the streets in the big cities know that their honest cry is heard, by those who can live in that beautiful nature, which seems to be  strangled by industry and by profit-seeking investors. The trees may be leaning in close to encourage another and want to give the people who live around them the lovely sweets of a year of pride standing high above the earth and streaming water. Now

it’s as though
Heaven itself conjoins with Earth. {Encouragement}

Is it not that the youngsters of today could also need some encouragement? Or should they become the driving force to get those older people coming to change their attitude of life? Perhaps the roles have to be switched and in this age it have to be the younger ones to bring the older ones to the senses?

It is just my (feeling down) thought for today.

Find some Autumn reflections and lovely pictures at