In the European Union we can find more groups which deny the atrocities that happened only a little bit more than half a century ago. In a few weeks’ time, Poland’s Jewish community will mark the 50th anniversary of the events of March 1968. They will do so in the wake of arguably the most serious crisis in Polish-Jewish relations since the fall of communism in 1989, after the passage of controversial legislation criminalising the attribution to the Polish state or Polish nation of complicity in the crimes committed by Nazi Germany during the Holocaust. 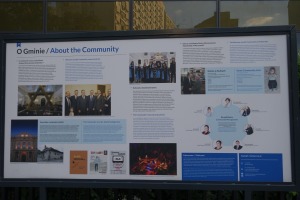 “About the Jewish Community” in Warsaw – Photo by Marysia Galbraith, cultural anthropologist, professor at New College and the Department of Anthropology at The University of Alabama, and Fulbright scholar in Poland for the 2014-2015 academic yea

Perhaps 10% of the of the pre-war Jewish population in Poland may have survived World War II and could see her Jewish culture to resurrect itself driven by the younger generation taking almost 50 years to face now again some danger. Also the relations between Poland and Israel may seem to come in their deepest crisis in memory in the wake of Poland’s move to criminalize criticism of Polish collaboration with the Nazis during the Holocaust.

To understand why this state of affairs is dangerous, regrettable and difficult to resolve, it is important to consider it against the backdrop of wider European-Israel and European-Jewish relations.

Speaking to the Observer, members of the Polish-Jewish community and activists involved in Polish-Jewish dialogue and reconciliation have expressed their shock and dismay at this deterioration in public discourse. While stressing that the present crisis is not comparable to that of March 1968, many said that, with their loyalties once again being called into question, the echoes of the rhetoric of the “anti-Zionist campaign” were too uncomfortable to ignore.

“We are receiving antisemitic, anti-Jewish statements on a daily basis,”

said Anna Chipczyńska, president of the Jewish Community of Warsaw.

“Members of the community feel that their loyalty is being questioned, that people are expecting them to take a side. Some of them also indicate the silence of friends and work colleagues in the face of these attacks, and this really hurts them.”

Still today we must be very well aware that anti-semitism in Poland is so high that Poland is listed the second most anti-Jewish country in Europe (Spain is first) according to a 2008 Pew survey of European sentiments towards Jews. 36 percent of Poles express hostility towards Jews. we can also not undue the impression that Poland wants to whitewash the role of the Poles who killed or denounced Jews during the German occupation of Poland during World War II.

2018 February 6, Tuesday Polish President Andrzej Duda signed legislation that outlaws blaming Poland as a nation for Holocaust crimes committed by Nazi Germany, defying both criticism from Israel and a warning from the U.S.

For some long time we could hear Polish officials arguing that a Holocaust speech law was needed to fight the use of expressions like “Polish death camps” as shorthand for the German camps in Nazi-occupied Poland where Jews and others were exterminated. U.S. Secretary of State Rex Tillerson said the new law

and found that the

Though President Andrzej Duda said he would also ask Poland’s constitutional court to evaluate the bill said it would not prohibit Holocaust survivors and witnesses from talking about crimes committed by individual Poles.

“We do not deny that there were cases of huge wickedness,”

he said in a speech but made it clear not the whole Polish nation could attributed to be guilty for what happen in their heimat.

He said the point of the law is to prevent the Polish nation as a whole from being wrongly accused of institutionalized participation in the Holocaust. He recalled that the Polish government at the time had to go into exile and Polish officials were those who struggled to inform the world that the Germans were putting Jews to death on Polish soil.

“No, there was no systemic way in which Poles took part in it,”

The bill first was proposed about two years ago, soon after Law and Justice took power in 2015, but hadn’t been an issue of public debate recently. Many people were surprised when lawmakers suddenly approved it on Jan. 26, the day before International Holocaust Remembrance Day.

Jan Grabowski, a historian at the University of Ottawa in Canada who studies Polish violence against Jews during the war, called Duda’s signing of the law

“further proof that the nationalists now in power in Poland will do anything to cater to the hard, right-wing core of their electorate.”

“Unfortunately, it is not only the nationalists but also the whole Polish society which will have to pay the price,”

said Grabowski, who is also a member of the Polish Center for Holocaust Research in Warsaw.

Like in Germany we should know that not all people agreed with what was happening and that not all Poles behaved indecently during German occupation. The Polish people shall have to recognise that there may have been a small criminal underclass, who were especially visible in small towns, like we shall have to see that their guilt cannot be put on the nation as a whole and that there also have been several Polish people who fought valiantly against the Nazis.

Poland’s chief rabbi, Michael Schudrich, told CNN on Tuesday February 20, that the fallout from the new law has been so fierce it has left many members of the Jewish community wondering if they are still welcome in Poland.

Schudrich said the open letter was not a political move but more of an opportunity to show how the community is feeling.

“This is one of the most devastating effects of the past few weeks,”

‘It is devastating that such questions are asked and speaks to the fragility of the situation. It’s not just the new law but the tone of the discussion with almost no reaction from leadership to that tone. A deafening silence by the leadership.”